Spotlight & Giveaway ~ HANGING BY A HAIR by Nancy J. Cohen 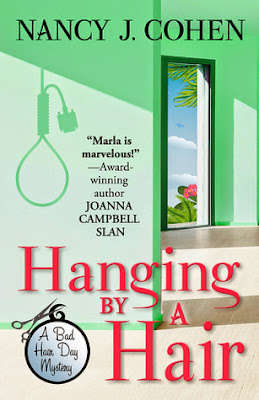 Hairstylist Marla Vail and her detective husband Dalton are delighted by every aspect of their new home, until their next-door neighbor illegally erects a fence on their mutual property line. Marla's hopes for making friends are ruined by a resultant argument between Dalton and the man, who happens to be the homeowners' association president. Things grow worse when their neighbor is found dead in his home the next day.


Despite a suicide note, Dalton suspects foul play, but he's removed from the case due to a conflict of interest. At her husband's suggestion, Marla works to know her neighbors better. One of them might have had a reason to want their president dead. Is it another board member? Or a local woman he'd spurned? Perhaps the guy's nephew wants his inheritance? And what about the protesters who disrupt the community garage sale? As Marla learns more about the guy next door, she discovers ugly truths that a murderer wants to keep hidden. Can a sharp-witted salon owner untangle the web of secrets before the killer strikes again?

With a cast of eccentric characters, a sassy hairdresser sleuth married to a sexy detective, South Florida scenery, and a suspenseful story mixed with humor, Hanging by a Hair is a fun, fast-paced mystery that will make you observe your neighbors more closely.

“How can I help him, Nicole?” Marla asked the next morning at work. “Dalton has never been pulled from a case in all the time I’ve known him. This could smear his reputation, both at work and in our new community. It’s even worse with his new partner taking over.”
The stylist’s eyebrows shot up. “Oh? What’s this?”
“He’s got a lady detective working with him now. I haven’t met her yet.”
“And now she’s working his case. You want to know what to do? If it turns out to be a homicide, find the killer. You’re experienced at sleuthing. Who else would have reason to want that man dead?”
Purchase Hanging by a Hair from:
Amazon | Barnes & Noble

Click here for my review of Hanging by a Hair

Nancy J. Cohen writes the humorous Bad Hair Day mystery series featuring hairdresser Marla Shore, who solves crimes with wit and style under the sultry Florida sun. Several of these titles have made the IMBA bestseller list. Nancy is also the author of Writing the Cozy Mystery, a valuable instructional guide for writers on how to write a winning whodunit. Her imaginative romances have proven popular with fans as well. Her titles in this genre have won the HOLT Medallion and Best Book in Romantic SciFi/Fantasy at The Romance Reviews. Active in the writing community and a featured speaker at libraries and conferences, Nancy is listed in Contemporary Authors, Poets & Writers, and Who’s Who in U.S. Writers, Editors, & Poets. Currently, she is serving as President of Florida Chapter Mystery Writers of America. When not busy writing, Nancy enjoys reading, fine dining, cruising and outlet shopping.
Places to find Nancy J. Cohen:
Website | Blog | Facebook | Twitter | Goodreads | Pinterest | Linked In | Google +

For her Hanging by a Hair Blog Tour giveaway, Nancy is giving away a Hardcover copy of the book and a Hanging By A Hair t-shirt.a Rafflecopter giveaway