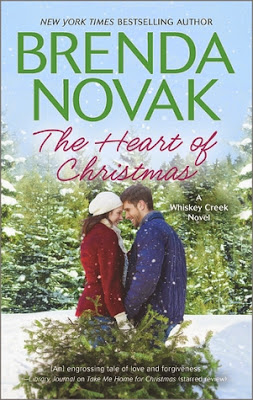 Just call her Christmas Eve…
Eve Harmon has always enjoyed Christmas, but this year it reminds her of everything she doesn’t have. Almost all her friends are married now, and that’s what Eve wants, too. Love. A husband and kids of her own. But the B-and-B she manages and even Whiskey Creek, the small Gold Country town where she was born and raised, suddenly seem…confining.
As Eve turns thirty-five, she’s worried that her future will simply be a reflection of her past. She’s dated all the eligible men in the area. There’s no one she could even imagine as a husband—until a handsome stranger comes to town. Eve’s definitely attracted to him, and he seems to have the same reaction to her. But his darkly mysterious past could ruin Eve’s happily ever after—just when it finally seems within reach. Just when she’s counting on the best Christmas of her life!

She stopped trying to act as if discovering him in her bed was no big deal. “This whole situation embarrasses me,” she admitted. “I’ve never taken anyone home from a bar before and, unlike you, I won’t be leaving this town any time soon. That means I’ll have to face all the people who witnessed my licentious behavior.”
He raised one eyebrow. “Licentious?”
“Promiscuous, debauched. Whatever you want to call it. Waking up with a total stranger isn’t something that’s normal for me.”
He studied her, his gaze…thoughtful. “Last night you told me it was your birthday.”
“And?”
“Quit being so hard on yourself. From what I could gather, it was a rough one. And with the holidays coming up, and knowing you’re going to spend another year alone, you said it wasn’t likely to get any easier.”
Damn. She’d shared that? Hadn’t she revealed enough when she took off her clothes? “My birthday was fine. Spending another Christmas as a single woman is fine. Everything’s fine.” How could she complain when she’d always had it so good?
She could hear the scrape of his beard growth as he ran a hand over his chin. “What’s that saying about protesting too much?”
“I’m not protesting.”
“If you say so.”
Holding the sheet in place, she slid a few more inches away from him, but she couldn’t go far. She was about to fall out of bed. He wasn’t bulky, but he had wide shoulders and he didn’t seem to be concerned about giving her space. “If you know it was my birthday, you remember more than getting dropped off here,” she said.
“It’s coming back to me.”
Bits and pieces were coming back to her, too. How she’d noticed him watching her from where he sat alone at the bar. How she’d danced for him in such a seductive manner, reveling in the appreciation she kindled in his eyes. How he’d eventually gotten up and walked over to join her. How he’d danced with her, so cautiously and respectfully even though the sparks between them felt like they were about to burn the place down.
How she’d slipped through the crush of bodies on the dance floor to catch her breath outside and he’d followed….
There were still things she couldn’t recall, however, and his name was one of them. Had he ever told her what it was?
“Who are you?” she asked.
Without even a stretch or a concluding peck on the cheek, he climbed out of bed and started to dress.
At least she wouldn’t have to ask him to leave, she told herself. It looked as if he planned on walking into the sunset—or sunrise since it was early—as soon as possible. But this wasn’t New York or Los Angeles. He couldn’t just hail a taxi. She lived in the Sierra Nevada foothills of Northern California in one of the many mining towns along Highway 49 that had sprung up when gold was discovered a century and a half ago. It was a community that hadn’t changed as much as one might expect in such a modern, technologically advanced world. And if the lack of urban conveniences in Whiskey Creek wasn’t enough of an obstacle, she lived several miles outside town. There was very little traffic out here and no buses or other public transit.
He’d have a long hike if he intended to make his way back to Whiskey Creek without catching a ride from her.
Or maybe he planned to call someone. He had a cell phone and, for the most part, there was service.
“You won’t answer?” she asked.
“What difference does my name make?” he finally responded.

Purchase The Heart of Christmas from:
Amazon | Barnes & Noble | iTunes

New York Times & USA Today Bestselling Author Brenda Novak is the author of more than fifty books. A four-time Rita nominee, she has won many awards, including the National Reader’s Choice, the Bookseller’s Best, the Book Buyer’s Best, the Daphne, and the Holt Medallion. She also runs an annual on-line auction for diabetes research every May at www.brendanovak.com (her youngest son has this disease). To date, she’s raised over $2 million. For more about Brenda, please visit www.brendanovak.com.

a Rafflecopter giveaway
In addition to the $100 Amazon Gift Card Giveaway, Brenda is have a The 12 Days of Christmas Contest on her blog.  You can enter that contest here.