Spotlight & Giveaway ~ OUT IN THE OPEN by JB Glazer 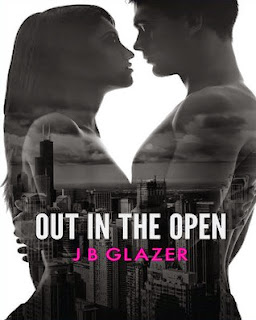 Advertising executive Lexi Winters had a plan, but leaving her cheating fiancé, her beloved New York, and a successful career weren’t on her agenda. At twenty-seven she faces the harsh reality of starting over again. She returns to her hometown of Chicago and lands a new job, where she meets Jake Hartman, the agency founder’s captivating nephew. Their chemistry is undeniable, but Lexi is protective of her fragile heart and isn’t ready to date again. Jake is on the fast track to leading the company and has vowed to his uncle never to let anything—or anyone—get in his way. What begins as harmless flirtation soon crosses a line that threatens to destroy Lexi and Jake’s promising careers. In a relationship plagued by secrets, will they risk everything to be out in the open?

Suddenly I’m so tired. I’m tired of being aloof and constantly not acting like myself so he won’t think I’m into him. I’m not bitchy by nature, and it’s exhausting. I feel myself relax in his arms. I think Jake senses it too, because he holds me tighter, and his touch is strong and reassuring. I’ve never been this close to him before. He’s intoxicating—a mix of something comforting and familiar with the promise of something new. His face is inches from mine, and it takes every fiber of my being not to pull him in for a kiss. As we dance, all my senses are heightened; I smell the distinctly earthy scent of his aftershave, feel the rise and fall of his chest with each breath, and practically touch the heat that emanates from his body. I listen to the music, and as the words wash over me, all I can think is how fitting the lyrics are. Yes, Jake. I know that it’s wrong, but still I run right into you.
“What’s this song?” Jake asks.
“‘Run’ by Matt Nathanson.”
“I like it,” he whispers in my ear.
I shiver, and he pulls me even closer, resting his cheek against mine. As the song ends, I reluctantly pull away, but Jake doesn’t let go of my hand. Instead he pulls me back toward him, and I feel vulnerable under his intense gaze, which is broken when my mom walks up to the podium and asks for everyone’s attention.

Purchase Out in the Open from:
Amazon | Barnes & Noble

J B Glazer developed a love of writing at a young age. She followed that passion to the University of Illinois, where she graduated with a degree from the College of Communications. She pursued a career in advertising, a field that provided an outlet to express her creativity. She has fifteen years of experience at the renowned Leo Burnett advertising agency in Chicago, which served as inspiration for her novel. She’s also a wife, mom, marketer, referee, short-order cook, maid, chocoholic, shopaholic, and multitasker extraordinaire.

Follow the Out in the Open Blog Tour here