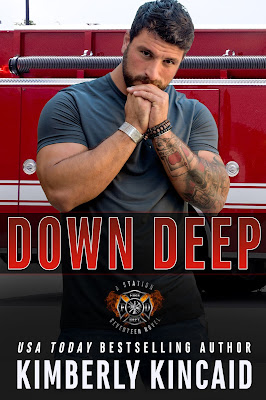 Ian Gamble has a past he’d rather forget—which is exactly what he’s doing at The Crooked Angel Bar and Grill when the place catches fire. Between his active duty in the Marines and his experience as a firefighter, his instincts get him and hot, headstrong bar manager, Kennedy Matthews, to safety. But those same instincts kick into high gear when the fire is ruled an arson, and he discovers Kennedy’s got secrets of her own.

The only thing that matters more to Kennedy than her bar is her brother. When she finds out he’s in over his head with a dangerous arsonist, she’ll do anything to keep him safe—even if it means teaming up with Gamble, who’s too sharp-eyed and hard-bodied for his own good. With every step, their attraction flares hotter and the risks grow more dangerous. Can Gamble and Kennedy face their fears—and their secrets—to catch a terrifying enemy? Or will they go down in flames?

Gamble dropped his gaze to his forearm, where Kennedy's fingers still pressed gently over his skin, and her eyes went round as she followed his downward stare.

“Oh. I shouldn’t…I mean, I didn’t…ugh, sorry,” she breathed, shifting to pull her hand away. But instinct collided with the desire already pumping through his veins, and he covered her fingers with his free hand, not hard enough to keep her from moving if she wanted to, but with enough intention to let her know he didn’t mind her touch.

In fact, he wanted it. Badly.

“I don’t want you to be sorry,” Gamble said, his heart beating faster as—instead of pulling away—Kennedy leaned in even closer.

Her fingers tightened, her pupils darkening her stare. “Then what do you want?” she whispered.

He erased the space between them in one swift movement. But she’d moved, too, pressing forward to meet him at the same time he’d leaned in to slant his mouth over hers. Her lips were soft, yet full of purpose, quickly parting to give him better access, and fuck yeah, he took it. Sliding his tongue along the seam of her lips, Gamble tasted her once, then twice, before deepening the kiss. Kennedy was far from a passive participant—and didn’t that just make his cock stand up and pay all sorts of attention—angling herself closer despite the constraints of the Nissan’s front seat. A low sound rose up from her throat as he swept his tongue further into her mouth to let it tangle with hers. Her moan prompted him to drop the hand that had been covering hers in favor of reaching out to cup the back of her neck, hauling her closer for another hot, deep taste.

Christ, she gave even better than she got, and before Gamble could process the movement, she’d curled her fingers around the front of his T-shirt to grip the cotton by his shoulders and hold his body in place against her chest. His heart slammed against his sternum, each beat sounding off in his ears and daring him to kiss her harder, touch more of her, to not stop until she begged him for unspeakable things with that sharp, sultry mouth. Kennedy edged her teeth over the sensitive skin on the inside of his bottom lip, applying just enough pressure to send a bolt of dark, dirty want all the way through him, and the last of his already shaky common sense snapped.

“Be careful,” Gamble ground out against her mouth, his cock throbbing behind the fly of his jeans. “I bite back.”

Kimberly Kincaid writes contemporary romance that splits the difference between sexy and sweet. When she’s not sitting cross-legged in an ancient desk chair known as “The Pleather Bomber”, she can be found practicing obscene amounts of yoga, whipping up anything from enchiladas to éclairs in her kitchen, or curled up with her nose in a book. Kimberly is a USA Today best-selling author and a 2015 RWA RITA® finalist who lives (and writes!) by the mantra that food is love. Kimberly resides in Virginia with her wildly patient husband and their three daughters.

Order a digital or print edition of DOWN DEEP by Kimberly Kincaid and get an exclusive Epilogue from Kimberly! Each entry will also be entered for the chance to win a Grand Prize!

The Grand Prize for 1 winner consists of:
~A 30-minute Google Hangout for the winner and ONE friend with Kimberly Kincaid and BT Urruela!
FILL OUT THE FORM HERE! https://a.pgtb.me/CDzscC