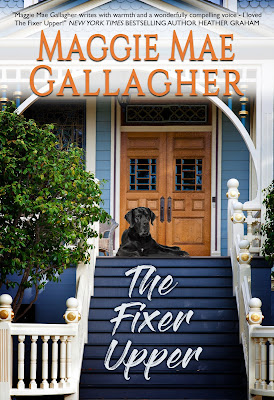 “Stocking up a bit?” Nate asked as they set the cooler down next to the deepfreeze.

Abby shrugged, flipping the lid up to reveal packages of steaks, chicken breasts, pork chops, ground beef, bacon, sausage, turkey. Staring at the mountain of meat, she had to admit she was a little obsessive when it came to being prepared. “Well, I did some research before accepting the position at Echo Springs Community College, and it said that roads can be impassible during the winter.”

“They can, but we do try to stay on top of road clearing. When it snows, the skiers come out in full force and head into the mountain resorts. All those travelers are the life-blood of this town, as they stop at the gas stations, restaurants, and shops. Without that, this town would go belly up in a New York minute. When the snows hit, the Styman boys stop working the appliance store and clear the streets, along with a few more of the locals. They work together to keep the city’s roads as clear as possible.”

“Good to know. But we aren’t in the city.” Which was something that wasn’t lost on her.

“No, we’re not. It can get a bit dicey out here. I tend to stay in town more and sleep at the station, but it’s good that you’re stocking up. Make sure you’ve got yourself some long underwear and some firewood.”

She blushed at the underwear comment and wanted to kick herself. What are you, a teenager? Just because Sheriff Stud Muffin’s topic made her wonder whether he was a boxers or briefs kind of man, and that she’d love to find out which he preferred, was no reason for Abby to act like an unschooled virgin.

Wait a second… “Firewood? Why would I need firewood?”

It wasn’t something she had considered she would even need. Where did she get some? Would she have to cut the wood herself? Abby could see herself trying to heft an ax to chop wood. Coordination was not her strong suit. More likely than not, she’d end up hacking the wood to bits, all while taking off a few of her limbs. It wouldn’t be pretty. Besides, knowing her, she’d leave the ax outside for the psycho killer to find and use to attack her in her home. She could imagine the headline:

Evie Callier’s great-niece hacked to death because she didn’t listen to her parents. Murder weapon apparently belonged to the victim, army of dolls suspected, news at eleven.

Jesus, she needed to get a grip.

Nate regarded her, his modest expression calling her a hundred times a fool for not being better prepared for life in the mountains, and said, “In case you lose power during a storm. It can get mighty cold up in these hills, especially when we are being pummeled with blizzard conditions. It doesn’t happen all the time, but in these older homes, power can get knocked out and be out for days.”

“What about a backup generator? Would that suffice?” Because if so, she’d turn right back around and head back to Gundry’s Bulk Superstore for one. The thought of being without power during a blizzard chilled her, and for a millisecond, she considered hightailing it back East. Until she remembered that back East would mean having to deal with her parents’ disapproval nearly twenty-four seven. She’d already visited that amusement park fun house, thank you very much, and didn’t want to return.

“Yes and no. Most are gas-operated, although there are newer models that are solar but come with a heftier price tag, and if you run out of fuel…”

“You run out of electricity. Does anyone sell firewood in town?” She’d start looking tonight online for a backup generator. The thought of having only a fireplace for warmth made her shudder involuntarily. With her luck, that would be when all the creepy dolls decided to rise up en masse and strike.

“Check with Styman’s. I’m not sure what their stock is this time of year, but if you’d like some help, I’d be happy to get you started.”

She unloaded the last of the meat into the freezer, and shut the lid. “That would be nice, if it’s not too much trouble. Thank you.”

“It’s no problem at all. After you.” He gestured at the wooden stairs.

Nate trailed her up the steps; she could feel his gaze boring into her back as they entered the kitchen. Abby restrained from fanning her face at the jolt of heat that hummed in her system whenever he was near.