An Interview & Giveaway with Karen Erickson

Last week I reviewed Jane's Gift by Karen Erickson (click here for the review).  I loved the book and immediately wanted to know more about this new author I just discovered.  I stalked her on her website and her Facebook page.  Okay, so maybe stalked is TOO strong of a word.  Let me rephrase that...I looked up her website and Facebook page and emailed her to let her she had a new fan. J I was able to actually get to do an interview with her, so imagine how EXCITED I was!!!!!

Here are a couple of questions I got to ask.  Be sure to stick around after the interview is over, because Karen LOVES to do contests.


Kim:  You are a VERY busy lady.  Between October 2012 and February 2013, you have a book coming out each month.  The first three are Christmas themed contemporary romances, including one historical, and the other two are on the sexier hotter side.  How difficult is it to have to write so many books in a short time frame in different genres?
Karen:  First off, thanks so much for having me as a guest on your blog! Okay, I must admit that a few of those books (novellas really, as Santa Baby and Fairies & Wishes, for instance, are both old novellas I received the rights back to, re-edited and recently self-published) were written years ago.
But I will admit I’m working on edits for two books currently and I am a little crazy. I usually don’t schedule much during the holiday season work-wise but that went straight out the window this year. Whoops. J
Writing in different subgenres though—I enjoy it. Changes it up, keeps me fresh, keeps me from getting bored.
Kim:  I’m so sorry.  I’m just so excited to interview you.  I forgot to say hi…. Hello. J
Kim:  Please tell us a little bit about your current book, (His Perfect Gift), which is part of the Five Golden Rings anthology with Sophie Barnes, Sandra Jones, Rena Gregory, and Vivienne Lorrett.


Karen:  Oh, I really had fun writing His Perfect Gift! It’s a sensual historical novella about a man who became a duke after his older brother died. Considering prior to his brother’s death he was merely the second son, he’d asked a certain young lady to marry him and she turned him down. Yet he still wants her. So he will do anything to make her his.
He doesn’t realize she’s never stopped wanting him as well…oh, yeah. You know what that means. *winks*
The Five Golden Rings anthology came out yesterday from Avon Impulse (and I read every story a few weeks ago—loved them all, such a variety!) so I hope if readers are in the mood for historical Christmas stories, they’ll pick this one up.
Kim:  Looking at your website your Worth It series definitely caught my attention.  The covers alone have me wanting to read the books.  Could you give me an overall summary of the series? (What is it about?)
Karen:  The Worth brothers own Worth Luxury, the largest luxury accessories company in the US. They are powerful, gorgeous, sexy and bossy as hell and they have their family quibbles, let me tell you.
What’s so great is that every single one of them is taken down by the woman they eventually fall in love with (my favorite brother is Rhett but sshh, don’t tell). I have a Worth It page on my website with all the pretty covers, blurbs, etc. in one spot. Worth Everything is the last in the series and it will release February 5th. But it’s also kicking off a new series that’s loosely tied to it so…those Worth brothers are like the gift that keeps on giving.
Kim:  I love Jane’s Gift.  I understand it was written three years ago, and the accident in which Jane’s husband died was different.  Was there anything else different about Jane and Christian?  (Was Christian always supposed to be a fireman?)
Karen:  I’m so glad you enjoyed Jane’s Gift! Yes, it was written three years ago (almost four now) and originally Jane suffered her burn injuries in a plane crash. But for the flow of the story, my editor thought it best to switch it to a house fire and I agreed with her.
Chris was always a fire captain in my mind. Jane came to me first though, after I read an article about a woman who suffered through horrific burns. I wanted to find the most unlikely hero for her ever so I gave her the man who fights fire for a living. I mean, come on. A burn victim falling in love with a firefighter? Built-in conflict.
Kim:  While reading Jane’s Gift I was so into it, I forgot I was supposed to write a review.  I was simply enjoying it.  What do you think makes the characters and the story so appealing?
Karen:  I’m flattered you would say such a thing—thank you! I really wanted these characters to be real. Not just Jane and Chris but also her children, her family, her friends. I wanted the characters to be relatable, I wanted the town to feel comfortable without being too cloying and sweet. I really, really hope I accomplished that.
The next book in the series is Cameron’s Homecoming, which should come out in March. It has a different feel than Jane’s Gift—it’s lighter, a little sexier. Cameron is to die for, if I can say that about my own creation LOL. Everyone from Jane’s family (including Jane!) is in the book though poor Chris, I just realized he doesn’t play much of a part! If all goes well, readers will get Mac’s story next. There’s a lot of Mac featured in Cameron’s Homecoming. As well as Mac’s future heroine…
Karen:  Let’s have a contest!
Kim:  I love contests!
Karen:  One lucky winner will receive a $10 gift card Amazon or B&N gift card (winner’s choice) and a 2013 Dance on Fire! Calendar (featuring the Sacramento Ballet and the Sacramento Area Firefighters), which benefits the Firefighters Burn Institute in Sacramento.

***UPDATE: To be entered for this contest, please leave a comment below. The contest will end on Thursday, December 13th. The winner will December 17th to respond to email notification.*** 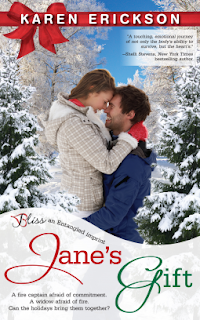 
A fire captain afraid of commitment. A widow afraid of fire. Can the holidays bring them together?
A devastating house fire cost Jane Clark nearly everything: her husband, her confidence, and her looks, with the physical scars marbling her body. Now, two years later, she's living and healing back in her childhood hometown of Lone Pine Lake. The upcoming holidays are the perfect opportunity to bring some Christmas cheer into her young children's lives, starting with a visit to the firehouse, where her brother's best friend has offered to help quell their residual fears.
Lone Pine's resident playboy, fire captain Christian Nelson is happy with his single-guy lifestyle. He's an everyday local hero, so he's never wanting for attention around the holidays. But when Jane Clark shows up, Chris is immediately drawn to the beautiful widow--even though kids and commitment have never been his style.
Despite her brother's warnings about his friend's playboy status and dangerous occupation, Jane can't help but fall for the gorgeous fire captain. The holidays are a time of new beginnings, but can two scarred people find the strength to let go of their pasts to live in the present, when a lifetime together might be the sweetest gift of all?


Keep up with the Jane’s Gift blog tour here (and enter to win the grand prize—a Kindle Paperwhite!)