Game for Marriage by Karen Erickson 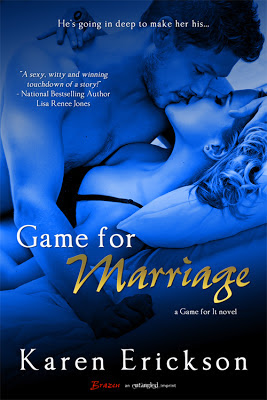 Game for
Marriage
by Karen Erickson

He’s going in deep to make her his…

Struggling artist Sheridan Harper never imagined she’d spend a sizzling night with Jared Quinn, the smoking-hot star quarterback of her local professional football team, the San Jose Hawks.  And she’s even more shocked when Jared’s publicist offers her a proposition: a fake marriage to keep Jared out of the gossip mags.  Being that close to Jared would be too tempting, so to protect her heart, she insists on secretly including a clause forbidding sex between them.

Jared just wants to keep his starting QB job and keep it in San Jose.  His reputation as a ladies’ man has landed him in the headlines one too many times, but there’s something about his kind, passionate new wife that tempts him beyond reason.  Any sort of intimacy between them is completely forbidden, but as their bodies fall in deep, will their hearts follow suit?

Mmmmm....Where do I start?  I haven’t read a Karen Erickson book that I haven’t liked.  Add a starting QB to the mix and you have a recipe for a really good read.  Add in Entangled Publishing’s Brazen line and you have a H-O-T read.  I’m talking you need a shower or two while reading the book.

The concept of two people getting married and pretending to be madly in love in order to save someone's job or reputation isn't new.  One thing I liked about this book is that it doesn’t follow the standard storyline that other books like this does.  I can't say what that is exactly, because that would be giving away too much.

Jared Quinn is the hot and sexy NFL quarterback for the San Jose Hawks.  He’s a guy who has been known to have a one-night stand a time or two.  Okay, more like a lot.  His team has just been purchased by a new owner who wants Jared to clean up his image.  As it appears Jared’s name has been mentioned as the reason a former teammate's marriage ending.

Sheridan Harper (I love that name.) is a young twenty-five year old woman who owns and operates an art studio in a popular section of downtown Carmel.  Sheridan inherited the studio from her grandmother a year ago, after her death.  For Sheridan, the studio means everything to her.  Unfortunately, she’s having a hard time meeting her expenses.  She’s pretty close to having to sell the studio.

Jared and Sheridan meet by chance at an expo where she’s literally painting a live picture of what’s going on.  One thing leads to another and they have drinks.  Sheridan is the kind of girl who NEVER does anything outlandish.  So she decides to.  One night and one night only with Jared Quinn.  Easier said than done.

Jared’s people, you know, his agent and publicist decide he needs to clean up his image and Sheridan is just the woman to make it happen.  They suggest Jared and Sheridan get married, even though they don’t know each other, for one year.  The goal in mind is that Jared gets a nice wholesome girl that people will love and she gets enough money so she doesn’t have to worry about having to sell her studio, plus an increase in business profit from being married to Jared.

I know...too easy right?  What could possibly go wrong?  Well for starters, Sheridan secretly has her lawyer put in a no sex clause, as a way of protecting herself from Jared.  Unfortunately, she didn’t realize at the time how much she wanted a repeat performance of what should have been their one-night stand.

Jared is ALL kinds of hot.  He says things like, “And I’m ready to make a bet I could seduce you with words alone."  Ah, yeah, with the hot sexy voice I’m hearing in my head.  I can’t even tell you what my most favorite line is...  Oh my gosh!

Check out this mini excerpt:

Sheridan chewed on her lower lip. “What do you want if you win? And how are you going to prove it?”


“Oh, I’ll know.” She was halfway there already, though she didn’t even realize it. Damn, his wife was hot. “If I win, I get to do whatever I want to you tonight when we get home.” His seduction had already begun, with those particularly chosen words.


Her eyes widened the slightest bit.. “But we’re not supposed to...”


“I can keep a secret if you can,” he murmured, reaching out to trace her lower lip with his thumb. “Game on, wife.”

I could NOT get enough of Jared and Sheridan.  They are a great couple and the love they have for each other comes through this book.  I'm pretty lucky because this is the first book in the series.  I can't wait for the next one.  Since the second book will feature Willow Cavanaugh, Sheridan's best friend, and Nick Hamilton, Jared's best friend, I'm sure we'll get a little bit of the Quinn's as well.