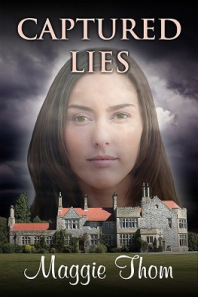 She was kidnapped not once but twice and now someone wants her dead because of it....
Her life was a lie!

Bailey knew her upbringing wasn’t normal but she’s worked hard to stabilize her life. At 29, she finally has a good business, a stable home; her life is miles from that of her childhood. Then suddenly her mother dies, leaving a gaping hole and a discovery that they may not even be related. If Guy, the private investigator is to be believed, her life is a lie. Using the skills she learned on the streets, Bailey travels back through a sketchy and dangerous past, to find answers. Dodging bullets, staying ahead of those who want her dead and convincing Guy she can do it alone, are making it difficult to discover not only the secrets of her mother’s past but that of a family claiming she is theirs.

Everyone seems to have a story... but who’s telling the truth? And who wants her dead? Is Guy part of the solution? Or part of the problem? To discover the facts, she’ll have to untangle a web of deceit, lies, and secrets, dating back over thirty years.

What would you do if you found out your life was a total lie?  Bailey Saunders is about to find out.

Captured Lies had my attention from the very beginning, with a newspaper article dated February 14, 1983.  With that said, I had high expectations for this book.  The first chapter was amazing.  I have to admit I'm a little torn as to my feelings for this book.  At times, I think there was information put in that wasn't needed.  At the same time, the book left me wanting more.

Bailey Saunders, aka Cassidy Lefevre, was kidnapped from Gracefield Hospital when she was only two days old.  While reading this book, I became more and more impressed with Bailey as the story went on.  Bailey/Cassidy is a survivor in EVERY sense of the word.  Due to people in her life that she don't even know, she shouldn't have even been born.  As an infant, she even escaped death.  Born into a life of privilege, she grew up with barely enough to survive.  At a young age, she became streetsmart, a skill she will need to survive now and find out why people want her dead.

Guy Turner is a private investigator/former cop hired by his step-grandmother, Dorothea Lindell, to locate Cassidy.  Guy, who has a dark past of his own, isn't truly Dorothea's grandchild, but was taken in by her because she knew his mother and grandmother.  Dorothea is the true grandmother of Cassidy/Bailey.  In the twenty-nine years since Cassidy's disappearance, Dorothea has never stopped looking for her only grandchild.  Unfortunately, Dorothea's desire to find Cassidy and Guy's asking of questions, endangers Bailey/Cassidy's life.  It appears some secrets are better left unknown and several people want Bailey dead before those secrets are brought to light.

The list of suspects is a little long.  The tangled web that surrounds this story is unbelievable.  Ms. Thom did a great job in that respect.  I literally had to write information down on a piece of paper to keep up with everything.  Looking back, it might have been possible to figure out who was behind Cassidy's initial kidnapping, but the question of why wasn't answered until almost the end.

Captured Lies is a story full of surprises.  You get introduced to some pretty bad characters.  I mean people that nightmares are made of.  The story has violent moments with physical abuse and hints of sexual abuse.  There is a mini romance, but there isn't a lot of detail; it's pretty much left to your imagination.  I loved that Maggie included a little humorous dialog between Bailey and Guy as a way to break up all of the tension going on in the book.

What I didn't like about the book was that I felt it was missing closure.  I also am having issues with the antagonist.  Meaning, this person is STILL on my mind.  I just can’t stop thinking about them.  Talk about pure EVIL.  I have no idea how Ms. Thom was able to come up with and write this character.

Would I read Maggie Thom?  The answer to that question is a definite yes.


Have I piqued your interest yet? No?
Then how about this excerpt....

He growled, fury radiated off him.  He stormed over to the window, grabbed the black covering, about to pull it back.  It was then she realized that the loud hum she’d heard, was a vehicle.  Praying that it was someone looking for her and not someone to help him, she panicked, kicking out with her foot.  The metal stool, sitting in front of his electronic equipment, clanged loudly as it crashed into the table.  He whipped around. Rage contorted his face.  He stormed over to the detonator and punched in a code.  The flashing stopped.  The countdown began.
19:59
19:58
19:57
19:56
She stared at the numbers that were steadily dropping.  One at a time.  Slowly.  Methodically.
“You’re finished.  And all because of me.”  He laughed.  “Oh the people, that will cry over your death.  It’s like music to my ears.”
“You really think you’re big enough to get away with this?”
He strode over to her and clipped her jaw.  Her lip immediately bloomed into a fat puff ball.  A buzzing sound filled her ears.  Just at that moment...

Rating: 5 (Weeks later this book is still with me.)