Review: Bring Me Back by Karen Booth 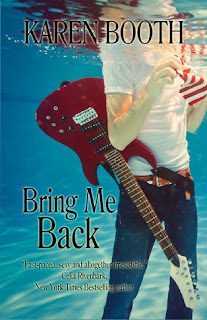 Music critic Claire Abby is a single mom dreading her daughter’s departure for college and worried that turning forty will leave her career running on fumes.  She’s floored when she lands a Rolling Stone cover story on 80s British rock legend Christopher Penman.  She spent her teenage years fantasizing he was her boyfriend.

In person, Christopher is everything Claire feared he’d be—charming, witty and unwilling to address the rumors he’s dodged for a decade.  Still, she contains her adolescent fantasies and manages to earn his trust, unearthing the truth and the devastating secret behind it.  His blockbuster story is her first priority when she returns home, a nearly impossible task when Christopher starts calling and flirting.  She knows she should maintain a professional distance.  She knows she should focus on the story.  She knows it would be best to simply walk away.  But how can she say “no” to the man she could never forget?


REVIEW
Bring Me Back is a story every girl who has ever had a teenage crush on a band member can relate to.  Honestly, what girl hasn't dreamed about being an adult and meeting the guy whose posters were all over her bedroom walls?  This is the story of what happens when one lucky woman gets to live out her teenage dreams.

Claire Abby is a freelance music writer for various magazines/blogs.  Claire’s biggest break to date just fell into her lap.  Claire has the opportunity to get an exclusive interview with her teenage heartthrob, Christopher Penman, of the group Banks Forest.  If things go well, her interview will land her and Christopher on the cover of Rolling Stone.

Christopher Penman is the former guitarist for the 80s rock band, Banks Forest.  Christopher has had a tumultuous private life.  He is notorious for being very private about his life and hates the media as much as a shark loves fresh meat.  Chris has been burned in the past and no one wants to know what has really happened.  Let’s face it, scandal sells magazines and pictures are always worth a thousand words, even when the pictures are misleading and deceiving.  Chris is attempting a second solo comeback and needs to get his name out there, but he plans to do it on his own terms.

For Chris, his interview with Claire started out just being vague.  He had every intention of just playing around with her and not giving her too much information.  But as Chris suddenly feels a connection with Claire, things changed and he shares with Claire things he has NEVER talked about before.

Claire is a single mother to a seventeen-year-old girl.  Her love/lust for Chris puts her career in jeopardy.  She is powerless to fight the connection she has to Chris.  Secrets are revealed that could destroy her relationship with Chris and everything she’s worked so hard for professionally.

Over the course of the book, you’re able to ride along with Claire and Chris on their journey from being adversaries, to their friendship, to their love for each other.  Also along the way, you will experience their heartbreak and anguish.

Christopher and Claire are characters that you will immediately fall in love with.  Having my own teenage crush, I can totally see myself in Claire’s shoes.  Possibly doing all the same things she does.  One can only hope that for all of us girls out there who once had the same dreams, that Claire will find her happy ever after and allow us to live vicariously through her.

Would you like to get to know Christopher Penman a little better?  Check out his interview with Karen here.

Karen will award one lucky Read Your Writes Book Reviews commenter a digital copy of one of her back list titles, winner's choice.  The question for you is, as a teenager who was your favorite band and/or heartthrob crush?


Click on the banner for other stops on Karen’s tour. 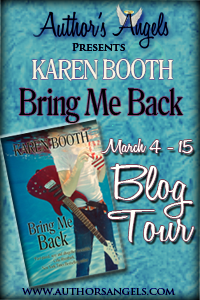