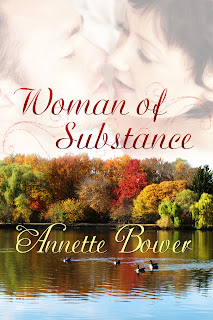 "You will never understand what it means to be fat.”  With those words, grad student Robbie Smith begins the Fat-Like-Me project.  In order to support her thesis, she puts on a fat suit to measure people’s reactions to the new her.

Accused of embezzling funds, Professor Jake Proctor returns home to spend quality time with the only father he has ever known.  There, he meets an intriguing overweight woman who reminds him of his late grandmother.  She’s witty, charming, and cares deeply for those around her, including his dying grandfather.

When Robbie meets Jake while she’s in disguise, she deceives him for all the right reasons.  But how long can she maintain the deception before Jake discovers that she is not who he believes her to be?


Setting: Robbie in her disguise meets Jake Proctor for the first time and there are not good impressions shared.


Robbie’s cheeks burned.  “You, you think I’m asking Frank for money?”  She forced herself to stand straight and gripped her hands so she wouldn’t brush at the dirt clinging to the front of her jacket and kept both feet on the ground so she wouldn’t kick him in the shins.  These solid shoes would give him a good bruise.
“For starters, you look as if you could use some clean clothes.  There’s bread on the bench.  And there’s the open wallet and a frail, old, man.”  His clipped words and flashing eyes when he nodded toward each item left no room for doubt as to exactly what he thought.
Struggling between her outrage and the genuine concern in Jake’s eyes, she said, “Ah, Sherlock Holmes, I presume.”  Nincompoop.  Just goes to show a well-fitted jacket and height can disguise real character, too.
“No.”  He put his hands behind his back and jutted his chin forward.  “I’m a concerned grandson.”
“Stop it, both of you,” Frank growled.  “Here’s the picture of Mabel I wanted to show you before Jake turned up out of the blue.”  He handed his billfold to Robbie.  Behind yellowed plastic was the image of a woman with dark curls smiling at the camera holding a baby wrapped in a blanket.
“That’s our Mabel.”  He looked from Jake to Robbie.
“Yes.”  Jake stood behind Frank and his hands hung loosely at his side.
Robbie felt a sense of relief.  She turned toward Jake and pointed at the baby.  “You?”
“No.”  Jake sounded resigned.  Robbie understood that sometimes a person just has to allow the story to be told.”

Annette Bower writes about women in family and women in love and women’s quest for love.  Her short stories are published in magazines and anthologies in Canada, United States and in the United Kingdom.

Annette Bower lives and writes stories from a high rise where she can see the immediate hustle and bustle of downtown Regina and experience the changes in the grain fields throughout the Saskatchewan seasons.


Annette is also the author of:

Robin “Robbie” Smith is a twenty-five year old grad student majoring in Human Resources.  Robbie’s thesis is to determine how society treats people who are different from them.  Mainly how society judges people who are obese.  In her case, how obsese women are treated.

Jake Proctor is a thirty-five-year old professor of Anthropology.  He has been accused of stealing $15,000 from his project’s fund.  He is taking a leave of absence while the investigation into the missing funds is going on and he is using the time to spend with his dying grandfather, the only family member he has left.

With the help of three women, Mavis, Sharon, and Margaret, who are all overweight themselves and struggling with and finding their own ways to deal with society’s perception of them, Robbie transforms from a small sized woman into a large woman.

On Robbie’s first outing as Robin, she meets an elderly man named Frank Proctor.  Frank is the grandfather of Jake and he is also dying of leukemia.  Robin reminds Frank of his late wife Mabel.  They quickly begin a friendship.

In the beginning, Jake is suspicious of Robin and thinks she’s trying to pry upon an old man.  Frank and Robin like each other and get along really good.  Once Jake realizes that Robin isn't trying to pry upon Frank, he asks Robin to spend more time with his Grandfather.  Jake is even willing to pay Robin for her time; something she is very upset by.  Jake’s heart is actually in the right place.  He’s concerned about his Grandfather being alone too much in the final days he has left.

While Robin is forming a bond with Frank, she’s also forming a friendship with Jake.  At different points in time throughout the book, Jake and the real Robbie meet on various occasions.  Robbie is terrified that at some point Jake is going to figure out what she’s up to.  Jake seems to become very comfortable with Robin, but not so comfortable with Robbie.  It appears that Robin with her size and her caring nature reminds Jake of his Grandmother.

Jake accidently discovers that Robbie is actually Robin and that she put on a fat suit for the purpose of her thesis, on the same day his Grandfather passes away.  This discovery makes Jake question just who Robbie/Robin really is and if everything about her was just part of her act.  Jake has to come to terms with his past and be willing to look inside himself.

Giveaway time!
Annette will be awarding a $25 Amazon Gift Card to a randomly drawn commenter during the tour.  Leave a comment below and be sure to include your email address.  To increase your chances of winning, follow the tour and leave comments at the other sites.