Beth Fred's The Fate of A Marlowe Girl - Review 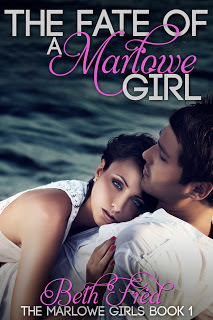 The Fate of a Marlowe Girl (Novella)
When twenty-four-year-old Tiffany escapes her sister Kammy's too wild Cancun bachelorette party, she finds herself in a bar with the unwanted attention of a gorgeous local named Luke.
Luke may be charming but Tiffany is leaving in two days and doesn't need any complications.  But complications are exactly what she gets when the cops show up to raid Kammy's party.  When Kammy is arrested, Tiffany agrees to have dinner with Luke, so he'll help her get Kammy out of jail.  Kammy's arrest forces her to spend an extra day in Cancun, meaning she'll miss a crucial meeting, and as an accountant in tax season, she is already drowning in work.  Not to mention, every second she spends with Luke makes it harder to leave.  With Luke, Tiffany is almost ready to forget about work.
Will the airport be their final goodbye?

The Fate of a Marlowe Girl is told from the perspective of Tiffany, a twenty-four-year old pushover.  That in and of itself had me wondering if I was going to like this book.

Tiffany is an accountant from Houston.  She’s in Cancun for her sister’s bachelorette party.  The whole situation is bad.  No, that’s not true.  The whole situation is HORRIBLE.  Tiffany is Kammy’s maid of honor, thus she’s responsible for the bachelorette party.  Not only does Kammy insist that her bachelorette party be held in Cancun, she also insists that Tiffany pay for her and a dozen or so of her friends.  I’m talking airfare and hotel.  The girls’ mother insisted that Tiffany do this for her sister.  Not that Tiffany REALLY has the money to do all of this.  Adding to Tiffany’s stress is the fact that the April 15th tax deadline is two weeks away.  The worst part is that Kammy is marrying Tiffany’s ex-boyfriend, the one who cheated on her with Kammy.
Tiffany wants to give her sister a nice bachelorette party.  Kammy, being the childish person that she is, has allowed her friends and herself to let the party get out of hand and disrespect her sister.  To say that Kammy is NOT one of my favorite people is an understatement.  Kammy is ungrateful and doesn’t even appreciate what her sister is doing for her.  The same can also be said for Kammy’s friends.
Tiffany decides to flee her overcrowded hotel room and ends up in the hotel bar where she meets Luke, a handsome, charming man.  What transpires from this moment is incredible, unbelievable, and a little funny.  Luke brings out a different side of Tiffany.  The new Tiffany is one you will root for and like, if not love.  Luke forces Tiffany to relax and have fun.  He also makes her realize that she isn’t responsible for Kammy and that Kammy should be taking care of herself.
Oh my gosh!  I SO loved this book.  I’m looking forward to the next book in the series.