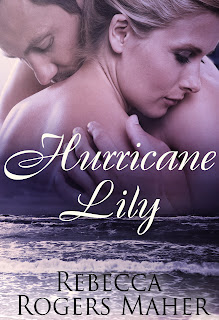 Lily Sawyer flees her controlling, wealthy family in New York City for a solitary existence on Cape Cod. Three months later, a mounting anxiety binds her to the house she can no longer leave.
With hurricane season approaching, Lily hires Cliff Buckley—an angry carpenter with an immediate disgust for his elitist employer—to storm-proof her house.
Cliff soon discovers they have more in common than he thinks, as well as a raging spark between them could either destroy—or save—everything they care about. The question is, can either of them survive Hurricane Lily?


This is the second book by Rebecca I’ve read. I went into reading Hurricane Lily, prepared for an emotional roller coaster. Rebecca writes romances that aren’t sweet. They’re painful and real. She draws from real experiences women go through. The characters from Hurricane Lily without a doubt are real. This book was different from what I expected. It didn’t rip away at me and leave me feeling exposed.
Lily Sawyer leaves New York City to spend some time away from everything, at an old family house on Cape Cod. With hurricane season underway, Lily needs a contractor to make some much needed repairs on the neglected house. Cliff Buckley is the contractor who comes in and turns Lily’s life around.
Lily and Cliff are BOTH highly flawed characters. Lily grew up a rich kid in New York City, who at the age of fifteen found her mother dead as a result of a suicide. Lily’s mother, Sylvia, was the only parent who seemed to love and care for her. Her father is very aloof and doesn’t like that at times, Lily causes disruption in his life. Cliff was raised by his single, blue-collar, hard working father. His mother abandoned the family, saying that she didn't want to be tied down with children. However, she married a wealthy Cape Cod visitor and went on to have three more children. Before Cliff’s father died, he eventually married his longtime girlfriend Bonnie, who in a sense was always Cliff’s stepmother and to a certain extent, his “light”.
The beginning of the story is a little tiring with both Lily and Cliff going back and forth with their dislike for one another. Cliff sees Lily as being cold and stiff. She’s exactly the type of person he despises, wealthy with a sense of entitlement. Someone who puts her nose down at people who are “below” her class. But she’s confusing in that she leaves him and his crew beverages and fresh baked goods. Lily sees Cliff as being a hard-pressed jerk, to put it mildly, with a HUGE chip on his shoulder. He listens to NPR and complains about everything.
Their opinions of each other and the way they react with one another based on those opinions make up a lot of the book. One thing that’s certain from the very beginning is the strange, uneasy attraction they have for one another.
Through what might be considered very odd encounters, Lily and Cliff start a physical relationship with each other. Though they know absolutely nothing about who the other really is, they are able to break down the walls they have each built up against the world. Lily has several understandable, yet bizarre issues, one being that she hasn’t stepped foot out of the house in five months.
What transpires in Hurricane Lily is a show of love that I didn’t see coming. Lily and Cliff are able to help one another heal from their past and forge, what I can only hope is a relationship that’s more than happy for now.

Buy Link:  Amazon
(and wherever eBooks are sold)