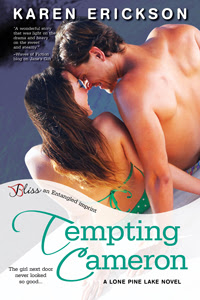 For Cameron McKenzie, Chloe Dawson has always just been his younger sister Jane’s best friend—a pesky annoyance who followed him around and acted like he hung the moon.  It isn’t until Jane’s wedding to her firefighter beau Chris that Chloe reappears in his life…and she isn’t pesky or annoying anymore.  In fact, the beautiful Chloe tempts him beyond reason.  But Cam knows he’s damaged goods—not nearly good enough for Lone Pine Lake’s resident good girl.
Chloe’s always dreamed of a future with the dark, brooding Cam, and after they share an explosive kiss, she wonders if her dream could be coming true.  Cam’s never stuck around his hometown for long, though, so she makes him an offer: one sweet summer romance with no strings attached.  This good girl’s ready for an adventure…one that just might end up lasting a lifetime.

Tempting Cameron is the second book in the Lone Pine Lake series by Karen.  The books are stand alone.
Cameron McKenzie is a troubled hero full of potential.  In fact, that's probably why I love him so much.  He's not the troubled hero who is a bad boy trying to do good but still screwing up.  He’s not the ladies’ man who’s afraid of commitment because he doesn’t want to be “tied down” to one woman.  He's the type of troubled hero who's had his heart broken and is lost and desperately searching for who he is and where he fits in.  Looking at the world through Cameron's eyes is heartbreaking.
Cameron is the middle child of the large McKenzie family.  In his family, it’s easy to see how one could feel left out and unimportant.  He’s a mystery to the reader as well as to his overbearing and suffocating family.  As a freelance war photographer, he travels the world.  Since he graduated high school, Cameron very rarely returns to Lone Pine Lake.
Chloe Dawson is a second grade teacher in the same town she was born and raised in.  In fact, she's been called the Town Princess and everyone loves her.  Chloe is the type of person who will put everyone ahead of herself.  Chloe has had a crush on Cameron since she was twelve-years-old.  However, she isn’t your typical heroine who gets starry eyed when it comes to her crush.  She’s feisty and calls Cameron on all of his crap.
One of the things I love about Cameron and Chloe as a couple is that they actually became friends before lovers.  They took the time to really get to know each other.  They danced around each other, slowly dropping little clues that they were interested in the other.  Chloe allowed herself to be Cameron's sounding board.  She listened to him and didn't judge him or criticize him.  The same thing goes with Cameron.  He's someone that Chloe finally allowed herself to confide in.  Chloe's willingness to be there for Cameron without any expectations is what actually allowed him to heal from all of the demons he carried around.
If there has ever been a romantic couple who should have had their own Brazen book, Cameron and Chloe is that couple.  But this is an Entangled Bliss book and the love scenes have to be left to the imagination.  But you KNOW that whatever happens between these two is really off the charts.
Some of my favorite lines in the book are:
"Life isn't perfect.  I know you always seemed to think it should be, but guess what?  It's messy and ugly and mean.  You just have to make the best of it and find the good where you can." - Mindy McKenzie
"If you don't let anyone in, then we can't screw you up, right?  On the other side, you can't screw up if you're alone so in your mind, it's the perfect solution.  You can go on living and be what you think is the best you can be, but really you're just a shell of a person." - Mindy McKenzie
I loved the little surprise thrown in at the end of the book.
Rating: 4
Release Date:  April 8, 2013
Book Length:  224 pages
Source:  Publisher
Reading Format:  Available in only in eBook
Connect with Karen Erickson:
Website | Facebook | Twitter | Goodreads