Review: Yours At Midnight by Robin Bielman 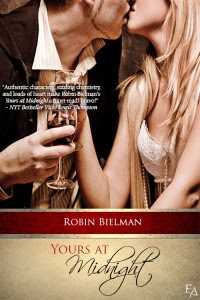 Lyric Whetsone only had eyes for Quinn Sobel’s brother Oliver, until a car crash took Oliver’s life on New Year’s Eve.  Then, a moment of shared grief between Quinn and Lyric became something more impassioned, something that frightened Quinn so much he ran from Lyric’s bed and her life, disappearing for four long years.
Now Quinn’s back for another New Year’s Eve, struggling for closure, desperate to leave his grief in the past and make amends with the girl of his dreams.
But Lyric has a secret–one that could drive Quinn from her life forever.  Will Quinn run away from the love and acceptance he’s always wanted…or will he claim his New Year’s kiss and make her his at midnight?

Quinn Sobel and Lyric Whetsone have known each other since they were seven years old, when the Sobel family moved next door to the Whetsone family.  For twenty years now, both families have been good friends.  Since they first met, Quinn has had feelings for Lyric, however Lyric was ALWAYS too quick to dismiss Quinn, preferring to focus on his twin brother Oliver.
Four years ago, on New Year’s Eve, Quinn and Lyric’s worlds came crushing down on them with the death of Oliver due to a DUI accident.  Quinn has spent the last four years living with the guilt of what happened to his brother and keeping a distance from his family.  Lyric has spent the last four years lying to everyone but herself.
Now, with the fourth anniversary of his brother’s passing, Quinn is ready to come clean and make amends with his parents and Lyric for leaving.  A family emergency keeps William and Vivian Sobel from spending this time with their only son, thus opening the door for Caroline and Douglas Whetsone to welcome Quinn back into their family for the holidays, much to Lyric’s horror.  Lyric wants nothing more than for Quinn to get on a plane and go back to New York, where it’s safer for her.
I will be the first to admit I had no idea what to expect from this story before I started reading it.  For whatever reason, Lyric’s secret completely blindsided me. I fell for Quinn immediately.  I mean seriously, who wouldn’t?  He’s hot, sexy, and speaks at least four different languages.  There were definitely times when I didn’t like Lyric.  Overall, she is a really good person with a good and kind heart, doing her best to cope with her situation.  I wish there was a Epilogue to this story so that I could find out what happened after New Year’s when Lyric’s secret is finally revealed to everyone.  This is one of those stories that I wish could go on forever.