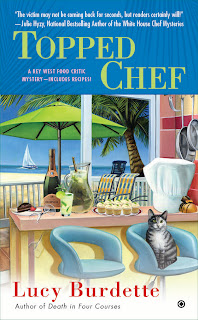 Hayley Snow loves her job as the food critic for Key Zest magazine, tasting the offerings from Key West’s most innovative restaurants. She’d rate her life four stars, until she’s forced into the spotlight…and another murder investigation.

Hoping for some good publicity, Hayley’s boss signs her up to help judge the Key West Topped Chef contest. Stakes are high as the winner could be the next cooking-show superstar. Hayley shows up for the filming nervous but excited, until she sees who’s on the judging panel with her: Sam Rizzoli, big shot businessman—and owner of the restaurant she just panned in her first negative review.

When Rizzoli turns up dead, the police assume his killer is one of his business rivals. But Hayley wonders whether someone is taking the contest a little too seriously. With the police following the wrong recipe, it’s up to Hayley to find the killer before she’s eliminated from the show…permanently.

Hi Lucy. Thank you for joining me today.
Hi Kim, thank you for hosting me today--I’m so delighted to be here!
I have admit I know nothing about you, so I going to start off with the most hated question… Lucy, please tell us about you.
I am both a clinical psychologist and a mystery writer. My eleventh book, TOPPED CHEF, will be published by NAL/Penguin on May 7. It’s the third in the Key West food critic mystery series starring Hayley Snow.
I have to ask this…The Key West Food Critic Mystery Series isn’t your first step into the writing world. You’ve previously written and published books under the name of Roberta Isleib. Why the name change?
As you mention, I had published eight mysteries using my own name, Roberta Isleib, before starting the current series. The golf lovers mysteries featured aspiring but neurotic golf professional Cassie Burdette. And the advice column mysteries starred psychologist Rebecca Butterman. When my new editor made the offer to buy the food critic mysteries, she asked if I’d be willing to write them using a pen name. A different name would distinguish the new series from the last two and possibly help with sales. I was happy to try this, and chose the name of my maternal grandmother, Lucille Burdette. She was a painter who died too young, so I like the idea of carrying her name forward with me as I go.
Tell me about Hayley Snow. Who is she and what makes her tick?
The series follows aspiring food critic Hayley Snow, a transplant from New Jersey who's invited to town by a man she thinks she loves. She barely knows him when she moves to the island, so it’s not a big surprise when the relationship blows up. But then what's a girl to do--return to her mom's guest room in New Jersey? In November? No way! By the time that romance sours, Hayley's fallen in love with the island--she'll do anything to stay. Would that include murder? The cops, of course, believe it might.
Her mother is a foodie, and Hayley loves food too--so she applies for a job as a food critic with a local style magazine called Key Zest. In this first book, Hayley comes across as a little dizzy and self-absorbed--so focused on figuring out how to get what she needs, that she overlooks the folks around her. But this gives her lots of room to grow--and coming from my work as a clinical psychologist, I enjoy so much watching a character grow and change. In book two, DEATH IN FOUR COURSES, Hayley’s mother is visiting during a major food writing conference. Both mother and daughter learn a lot about each other in the course of solving the murder mystery--and eating amazing food.
Your latest book is called Topped Chef. Tell us about it. What can we expect?
Hoping for some good publicity, Hayley’s boss has signed her up to help judge the Key West Topped Chef contest. Stakes are high as the winner could be the next cooking show superstar. Hayley shows up for the filming nervous but excited, until she sees who’s on the judging panel with her: Sam Rizzoli, big shot businessman—and owner of the restaurant she just panned in her first negative review.
If this isn’t bad enough, one of the judges on the panel is murdered, and another one attacked. It begins to look as though someone might be taking the contest way too seriously. And Hayley of course, has her own huge stake in finding out what’s going on...survival!
Where do you start when writing? Research, plotting, outline, or….?
I start with the characters most of the time. What do they want more than anything? How is Hayley growing and changing? What about her relationships with her friends and family? What secrets are characters keeping that make them act suspiciously? So those kinds of questions drive a lot of the story.
Then there is Key West, where I’m lucky to live half the year. It’s a gorgeous, fragile island packed with interesting people and conflicts. If I can’t find ideas there--even in the local paper--I’m in big trouble as a writer!
And I have to keep the books focused on food and Hayley’s job as a food critic, which means going out to eat:). Tough job, but someone has to do it.
What do you enjoy most about writing?
I love when the story starts coming together. I love knowing where a scene is going so the words come easily. I love having finished a first draft, so I can go back and do my favorite thing--editing and rewriting. I love seeing the cover for the first time and holding the first book in my hands. And I love meeting readers!
Is there anything else you would like to add, that I possibly missed?
Just housekeeping things like: you can find me at my website, www.lucyburdette.com, or on facebook www.facebook.com/lucyburdette, or twitter @lucyburdette. I also blog with www.mysteryloverskitchen.com and www.jungleredwriters.com.
Lucy, thank you for stopping by.  It was a pleasure to learn more about you.
Thanks so much for inviting me! Hope you enjoy Hayley’s adventures!

Lucy Burdette is the author of the Key West food critic mysteries.  As Roberta Isleib, she has also written the golf lovers mystery series and the advice column mysteries.  Her books and stories have been nominated for Agatha, Anthony, and Macavity awards.


Books in the A Key West Food Critic Mystery Series
1.  An Appetite for Murder
2.  Death in Four Courses