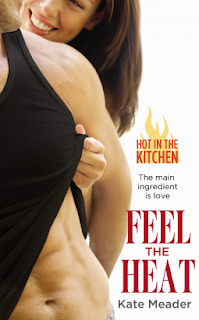 IF YOU CAN'T STAND THE HEAT . . .
Photographer Lili DeLuca spends all her time managing her family's Italian restaurant, instead of following her dream of getting an MFA. When famous British chef Jack Kilroy unexpectedly challenges her father to a cook-off, Lili decides she's tired of playing it safe and vows to seduce the tempting Brit. But once a video of her and Jack kissing goes viral and her luscious butt starts trending on Twitter, Lili fears she's cooked up a recipe for disaster.

. . . GET INTO THE BEDROOM
Jack Kilroy's celebrity has left him feeling used and used up. While Lili's oh-so-sexy moans when she tastes his delicious creations turn him on, he's even more aroused by how unimpressed this beautiful, funny woman is with his fame. He knows they could be amazing together, if she could only see past his bitch fork-wielding fan base. Now, as he's about to start a new prime time TV cooking show, can Jack convince Lili to realize her own ambitions - and turn up the heat in his kitchen?


I’m not quite sure what to say about this book.  I know that statement sounds bad, but I don’t mean it in a bad way.  FEEL THE HEAT by Kate Meader is beyond what I expected.  As a first time published author, Kate has given the reader everything.  There’s humor, mouth watering food, HOT sex and society issues all put together.  I went from spewing my drink one minute, to needing ice water because the scenes were so hot the next, and then being hungry with all the food talk the next minute.
Jack Kilroy is the talk of the cooking world.  He’s a British/Irish chef who cooks French cuisine.  He’s in Chicago to open a new restaurant and film an episode of his cooking show, Jack of All Trades.  Jack is sexy and arrogant, but self-assured.  He also has a super soft spot for those he cares about.  With Jack what you see is NOT what you truly get.
Liliana DeLuca is a heroine like I’ve never read before.  What I love about her is that she isn’t this size two to six girl with blonde/brown hair that’s fall to her shoulders wavy and soft as silk.  She has curves and probably buys the low end size Laine Bryant clothes and her hair is like that of a lion, very untamable.  Lili is a former “chubby girl” who was bullied all through school.  But she’s worked really hard to be comfortable in her own skin.  Lili is all about her family and she has a tendency to put others before herself.  She’s a talented photographer who has given up her dream of going to graduate school to be the manager of her family’s Italian restaurant.  That, in and of itself isn’t a bad thing.  However, what is bad is the the fact that Lili’s father, Tony, puts down her talent in what seems to be every chance he gets.  Lili is mouthy and generally isn’t one to take crap off of anyone, except for her father.  Aww...Obviously, I have some serious fan girl love for Lili.
When I first picked up FEEL THE HEAT, the opening scene had me laughing.  My first thought was Jill Shalvis.  Then further along I got to the romantic heat and it was “Woa”, I wasn’t expecting those words.  You then get into the issue of what society thinks is beautiful and the way people react to someone who isn’t your traditional model size thin.
I loved this book, because Jack Kilroy could have anyone he wants, but the minute he lays eyes on the curvy Lili DeLuca, in her Wonder Woman costume, he’s a goner.  It doesn’t even matter that she hits him over the head with a frying pan.  Jack has to convince Lili to go on a date with him before he will sleep with her.  These are two characters who have so many layers that it’s fun watching them peel them away.  These two face issues almost immediately, and from the start, Lili knows that without a doubt, Jack is her biggest supporter.
The secondary characters are surprisingly not people I hated.  Cara is Lili’s sister and Jack’s producer.  There’s something about her that I just can’t put my finger on.  She also just so happens to be the heroine in the next book, ALL FIRED UP.  Tad is Lili’s cousin and bartender at the family’s restaurant.  He’s someone I really want to know.  He’s protective, but flirts with everyone.  He has his eyes on Jules, Jack’s younger sister.  They actually get their story told in book three, HOT IN THE KITCHEN.  But I REALLY want the story of Laurent, who is Jack’s best friend and co-owner of Jack’s New York restaurant.  Laurent is this suave, French chef who appears to be a ladies man.  But when he’s had too much to drink, he’s funnier than usual.  I’m talking he will curl up on the sidewalk like a baby.
FEEL THE HEAT is a love affair that should not be missed.  Now if only I could actually have someone make me all of the dishes Jack made.....
Rating: 4
Release Date: May 7, 2013
Book Length: 384 pages
Source: Grand Central Forever via NetGalley
Reviewed by: Kim
Reading Format: Available in eBook and Paperback

Check out Kate’s guest post, where she talks about Jack & Lili.