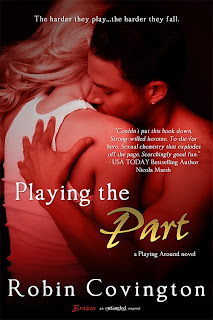 After publicly self-destructing over a heartbreak a year ago, bestselling romance writer Piper James is now making nice with her publisher by agreeing to teach Hollywood's favorite action star how to act like he's in love. Only playboy Mick Blackwell has no clue what love looks like.

When a seductive heat ignites between Piper and Mick, she jumps at the chance for a bit of fun between the sheets, but with two stipulations: she's kept out of the public eye and things end when she returns to New York. Only Mick keeps changing the rules on her. Tempted by America's favorite bad boy, Piper is wondering how far she's willing to bend...


This is the first book I’ve read by Robin Covington; someone I’ve wanted to read for awhile.  Oh my GOSH!  To say this book is hot is an understatement.  For her character inspirations, Robin used Shemar Moore and Lisa Loeb.  Shemar’s voice came through LOUD and CLEAR for me in this book.
Mick Blackwell is Hollywood’s action hero golden boy.  His John Dark movies make millions of dollars at the box office.  Mick is from an acting family and has been acting since he was child.  Having proven himself as a successful action star, Mick now wants to prove to Hollywood and everyone else that he’s more than just an action superstar.  He has fought hard to land the lead acting role in Regan’s Gift.  However, Mick isn’t connecting with the character and feeling the romantic passion his character should feel.
With Mick known for his playboy ways, his studio decides that he needs to learn how to act like he’s in love.  Enter Piper James, The New York Times bestselling romance author who just so happened to write Regan’s Gift.  In order to save her career and the movie, Piper must get Mick to search within himself and express love and passion.  The problem is...Mick has NEVER been in love.
There is instant attraction but Piper is skittish.  Her last encounter with a movie star destroyed her and almost her career.  Mick isn’t one to give up.  With his playboy ways and policy of never having anything serious, Piper decides that she should at least have some fun with Mick while she’s in Hollywood.  After only one encounter with Piper, Mick is able to nail his love scene, which shows how much his character is in love.
With Piper, Mick decides that casual isn’t what he’s looking for.  He isn’t ready for things to end when she flies back to New York.  To Piper’s surprise, she isn’t ready either.  What is supposed to be something quiet just between the two of them ends up on the first page of every magazine.  This puts Piper back in the public spotlight and paparazzi crosshairs that she hates.  What will Mick do to protect the one person who means more to him than anything?  And just who is it that leaked their private time together?  Sometimes when you’re playing at something, that something becomes very real and more powerful than you could ever expect.
PLAYING THE PART is a passionate, hot, and sexy story of two people coming together for the sake of a movie but finding themselves fighting for a part of a lifetime.
Rating: 4.5
Release Date: June 10, 2013
Book Length: 250 pages
Source: Publisher
Reviewed by: Kim
Reading Format: Available only in eBook