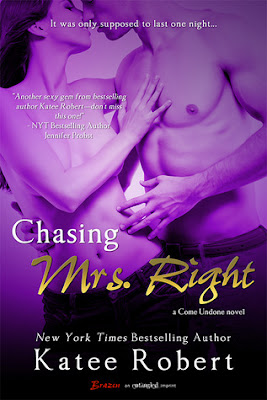 It was only supposed to last one night…


Roxanne Stokes doesn’t believe in love. She does, however, believe in the sexy-as-sin stranger who literally knocks her off her feet in front of a nightclub. The chemistry sparking between them takes her breath away, and she’ll do anything to ease the pain in his eyes…until she realizes the handsome stranger is her best friend’s older brother who’s just come home from war.
Ian Walser had no idea the gorgeous woman he slept with the night of his homecoming party was his little sister’s best friend—or that she’d be gone before morning. Roxanne’s touch soothes him in a way nothing else can, and he’s not ready to walk away from that yet. Not when spending time with her gave Ian a glimpse of everything he’s ever wanted.
When his sister unwittingly pushes them together, he sees his chance. But convincing a woman who doesn’t believe in love that she’s his Mrs. Right might be harder than any mission Ian’s undertaken. Good thing this soldier likes a challenge…
REVIEW
This is my first Katee Robert's book. I've checked her out on Facebook and she writes some pretty hot things and she has a great sense of humor.  I love the premise of this book.  You have two people who each have some issues but manage to find a way to resolve those issues together.
Ian is a great guy who is chasing after the one woman who understands him and actually, cheesy as it sounds, completes him. He literally knocks Roxanne off her feet.  Roxanne's issue is sorta like your classic romance novel issue.  She doesn't believe in love and thinks it only leads to heartbreak.  I mean hey, what's a girl to do?  It's not like she has a good track record with the whole " I love you" thing.  Her mother doesn't help things, with her own three failed marriages.  Hey, how about maybe you just weren't with the one person you were meant to spend the rest of your life with.
While I'm on the topic of mothers.  Oh my gosh... Poor Ian and Ellie.  Their mom is miserable and just wants to make everyone as miserable as she is.  I swear, she made me want to jump through the book and let her know what her place actually was.
I loved this story because Ian and Roxanne bring out the best in each other.  They truly make the other a better person and own and stand up to their issues.  Oh and yeah, of course the sex which is HOT isn't bad either.
I'm really excited that I discovered a new author to read and I can't wait to find out what else she has in store for us.
Rating: 4