Review ~ Deceiving the Witch Next Door by Melissa Bourbon Ramirez 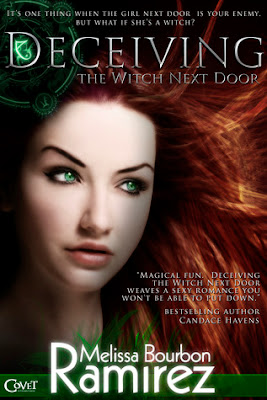 Down-on-her-luck witch Storie Bell never thought the biggest threat to her future would be Reid Malone, the very man she’d run from years before. After striking it rich in Texas shale, he’s back in town, and he seems hell-bent on getting in the way of her bookstore’s grand opening.
Reid knows there’s much more to Storie than meets the eye, but right now he has only one mission: to infiltrate her shop so he can snatch the elusive secret ingredient to his father’s million-dollar moonshine recipe. Once he does, he can go back to the city and get out of his small hometown, a place in which he has no future.
But as the days go by, he can’t help falling for Storie in every way…and every encounter brings him closer to finding out what happens when you try to deceive a witch.


REVIEW
Have you ever met someone, spent less than a hour with them and have them brand themselves into your mind?  I mean the kind of branding that has you thinking about them eight years after the fact?  This is what happens to Storie Bell and Reid Malone.  On one of the worst days of Storie’s life, she meets the one person who she can’t stop thinking about, Reid Malone.
Storie has just learned something about herself that she didn’t what to know, but it explained a lot.  She needs an escape and the lake is just the place to go.  Reid is at the lake to do a little fishing and relaxing, until a thunderstorm comes out of nowhere and he sees Storie jump into the lake for a swim.  Now, everyone knows lightning and water don’t mix.  Thus, Reid has to pull Storie out of the water before it’s too late.  The attraction between these two is instant, but Storie is leaving town and never coming back.  She can’t possibly do anything with a guy she just met.
Fast forward eight years and Storie’s father has passed away.  Storie is back in Bloomington, Texas with her best friend Harper to open a cafe and bookstore in place of the gas station left to Storie by her father.  To Storie’s surprise, the one person she doesn’t want to see is back in town and just so happens to be her next door business neighbor, Reid Malone.
Reid wants to buy the gas station building from Storie for his father, Jiggs.  Jiggs knows there’s something in the building that can help him with his multi-million dollar moonshine contract.  If he doesn’t find what Storie’s father has given him in the past, the contract offer goes away and Jiggs will have nothing to leave for a legacy.  Reid sets out on a mission to get what his father needs, no matter what he has to do to achieve it.  In the process if Storie happens to land in his bed, so be it.
Overall, I have to say I liked Deceiving the Witch Next Door.  I was surprised by the direction the book took.  I can’t say the story dragged on and on. I was expecting the romance part to come into full swing sooner than it did.  While the ending was complete for now,  I think it left a very big gap in the future.  But in the end, you find out what someone is willing to risk for the one they love.
Rating: 3.5