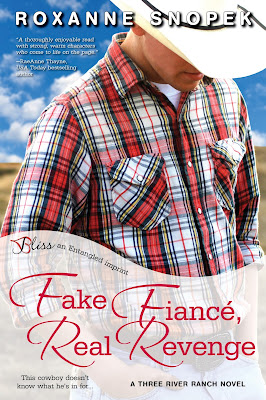 This cowboy doesn't know what he's in for...


Real-estate tycoon Mitchell Granger has a problem. In order to secure a lucrative deal with an eccentric client, he told the teeny white lie that he was engaged…and now he needs to prove it. Even worse? The only name that came to mind was Sabrina Becker, the girl he was never good enough for growing up, and who still lives near his family ranch.

Sabrina doesn’t mind posing as Mitch’s fake fiancée—no, she doesn’t mind at all. One, she’ll make him pay with new construction for her business. And two, Sabrina’s got a plan to exact revenge on her first love, the boy who left her and Three River Ranch behind. She’ll pretend so well, he’ll fall in love with her…and then he’ll get a taste of what true heartbreak feels like.

But as Mitch sheds his corporate skin and picks up his dusty jeans and cowboy hat, will both his and Sabrina’s grand plans get derailed by love?

REVIEW
I have to admit I was really looking forward to reading this book.  I’ve LOVED the Three River Ranch series so far.  Unfortunately, I didn’t fall in love with these characters like I did in the other books.  But with that being said, Fake Fiance, Real Revenge was a good read.  While you don’t have to read the other two books in this series, if you have, then you are definitely in for a treat because the two previous couples are mentioned a lot and Bliss is around to just make you laugh and pass out wisdom.
Mitchell Granger is the oldest brother of Carson Granger, the hero from Three River Ranch.  Sabrina Becker is the town mid-wife and best friend of Rory Granger, Carson’s wife.  Mitch and Sabrina share a history together.  They were highschool sweethearts.  Mitch had a rough time at home after the death of his mother.  He had issues with school and acted out a lot.  Sabrina was the “good girl”.  She saw who Mitch was beyond all of his issues.  Feeling trapped by his father’s hard handedness and feelings of not being good enough, Mitch was anxious to leave town.  Sabrina, not wanting to make Mitch feel as if she was tying him down, gave him his walking papers that he was more than willing to take.
Now ten years later, Mitch is a success in his own right, though he still sees himself as not being good enough.  Mitch is on the verge of making a deal of a lifetime that will put his company on the map more than it already is.  The only problem is that his client, Della Fontaine wants to set him up with her twenty-year-old daughter.  Thinking fast on his feet, Mitch tells Della that he’s engaged and the first name that pops out of his mouth is Sabrina.  Now, Della wants to visit Mitch’s hometown of Lutherton, Montana and meet his fiance.
Mitch and Sabrina come to an agreement that she will pretend to be his fiance in exchange for him expanding her medical facility.  Unbeknownst to Mitch, Sabrina has a plan to make him fall in love with her so she can rip his heart out just like he did hers ten years previously.  The only problem is...it seems these two have some unresolved feelings for each other.
Sabrina is a woman who tries to be tough but she isn’t.  Immediately upon seeing Mitch, she’s fighting a losing battle.  She has her demons that she wants to blame on Mitch.  Some that he really doesn’t know anything about.  I loved that Mitch is such a good guy and he doesn’t even see it.  Over the course of this book, not only does he heal his relationship with Carson but he also learns that the only person keeping him away from Three Rivers Ranch and his hometown is him.  When the chips are down, Mitch pulls out all the stops to make things right.
There are a couple of things I love about Roxanne and her books.. 1) The humor and dialogue she puts into her books and 2) Even when I’m not totally and completely connecting with the characters, she manages to still grip me and make me want to read the story.  This is truly a story of what second chances and forgiveness is all about.
Rating: 4