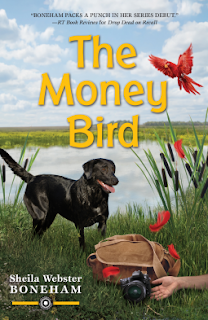 Murder Takes Flight
For Janet MacPhail, photographing retrievers in training is the perfect way to spend an evening. But a photo session at Twisted Lake takes a peculiar turn as Drake, her friend Tom’s Labrador, fetches a blood-soaked bag holding an exotic feather and a torn one-hundred-dollar bill.
When one of her photography students turns up dead at the lake, Janet investigates a secretive retreat center with help from Australian Shepherd Jay and her quirky neighbor Goldie. Between dog-training classes, photo assignments, and romantic interludes with Tom, Janet is determined to get to the bottom of things before another victim’s wings are clipped for good.

Ten Facts About Janet MacPhail
1.      Janet is an artist with a camera. She’s also lucky enough to make her living doing what she loves—taking great photos of animals, wild and domestic, and of other scenes from nature.
2.      Janet is a happy person. Oh, sure, she has her ups and downs. Who doesn’t? But she loves her work, and she loves her….
3.      Dog and cat. Jay, her Australian Shepherd, is her exercise partner, her teammate in canine competition, and her trusted companion. Leo, her cat, tries to act the tough guy, but he’s a cuddler at heart. And they’ve both proved themselves courageous and heroic, so Janet counts herself lucky to share their lives.
4.      Janet is very surprised to be getting random mail these days about retirement communities, long-term health care plans, and similar stuff. At first she thought some mail list company had made a dreadful mistake and confused her with her mother. Her neighbor, Goldie, set her straight, pointing out that a person in her fifties might be interested in some of these things. Janet bundled the junk together and kicked it to the curb with the recyclables.
5.      Goldie—Golden Sunshine—is Janet’s best friend. Happily, she’s also Janet’s next-door neighbor. Janet blames Goldie’s homemade breads and cookies for about twenty pounds she’d like to kick to the curb with the ads, but she loves Goldie nevertheless. She worries about her, too.
6.      Janet might be in love. That’s what she tells herself, although she knows she’s hiding from the truth. She’s debated herself into another five pounds over the past few months. Tom doesn’t seem to mind, or notice.
7.      Tom Saunders. He’s the subject of Janet’s internal debate. He isn’t perfect (except in jeans), but he loves his dog Drake and Janet’s critters, and helped Janet with her filial crisis. On top of that, he knows how to laugh, and cook, and…. Well, you know.
8.      The filial crisis…Janet’s mother has been battling dementia, and Janet’s brother Bill was no help with the decision to find a nursing home, so Janet did herself. Mom did not go gentle into that good place, but she seems to be settling into the garden therapy program. Janet visits often, but never knows whether her mother will know her.
9.      Brother Bill and his partner Norm are the only other family Janet has. At least that’s what she thought after Mom went to Shadetree Retirement, but then she realized that family is more than genetic. Bill, Norm, Jay, Leo, Goldie, Tom, and Drake—they’re all there for her, and she for them.
10.  Janet lives a pretty quiet, conventional life. Okay, lately she seems to be stumbling over a higher-than-expected number of dead bodies for a non-forensic photographer. But that has to be a fluke, right? Right?

Click here for my review of THE MONEY BIRD 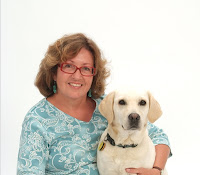 Sheila Webster Boneham is the author of 17 nonfiction books, six of which have won major awards from the Dog Writers Association of America and the Cat Writers Association. She is also the author of Drop Dead on Recall, the first in the Animals in Focus Mystery series. For the past two decades Boneham has been showing her Australian Shepherds and Labrador Retrievers in various canine sports. She has also bred top-winning Aussies, and founded rescue groups for Aussies and Labs. Boneham holds a doctorate in folklore and MFA in creative writing, and resides in Wilmington, N.C.

As part of Sheila’s THE MONEY BIRD tour promoted by Great Escapes Virtual Book Tours, she’s giving away three eBook copies of DROP DEAD ON RECALL or THE MONEY BIRD.  Follow the Rafflecopter below to enter.  Good luck.