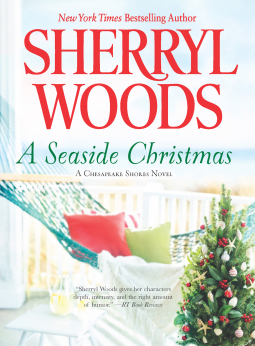 A Seaside Christmas (A Chesapeake Shores Novel)
by Sherryl Woods
Published by Harlequin MIRA
Releases ~ September 24, 2013
As the only child of a single mom, Jenny Collins wanted nothing more than to be part of a large, rambunctious family like the O'Briens. Ironically, though, when her mother married into that family, Jenny found herself feeling more like an outsider than ever.
Now, after years in Nashville as an established songwriter, Jenny's drawn back to Chesapeake Shores to collaborate on a Christmas production…and to make peace with the past. As if that's not challenging enough, Caleb Green, the singer who broke her heart, has followed her to town, determined to win her back.
With the help of a little O'Brien holiday magic, will Jenny and Caleb find a way to make sweet music forever?

Purchase A SEASIDE CHRISTMAS from Amazon or your favorite retailer

Earlier this summer I had a SERIOUS fan girl moment when I sent an email to an author and asked for an interview.  NEVER in a million years did I actually think she would respond to me!  Not only did she respond, she actually said yes to the interview!!!!
So with great pleasure and excitement, I ask you to sit back and enjoy my interview with New York Times and USA Today Bestselling Author, Sherryl Woods.

First of all Ms. Woods, I can NOT thank you enough for being here to today speaking with me.  I discovered your Chesapeake Shores series by accident a couple of years ago.  Once I started reading the first book I HAD to read the next and the next and on and on.  So I’m REALLY excited you decided to continue this series.
It's always difficult for me to decide when a series is truly over. Just when I think it might be, as with The Summer Garden in this series, readers nudge or a story pops into my head. People will have to take a bit of a leap with me in A Seaside Christmas, since characters are aging . . . and more in soap opera time than they would in real life!
Trust me when I say, your fans are just going to be thrilled.  Your latest book, A SEASIDE CHRISTMAS marks the tenth book in the series.  What do you think is the reason for the series’ success, which makes people never want to see it end? (And yes, I was one of those people on Facebook being very sad, asking for more.)
I think many readers have scattered families of their own and enjoy reading about the O'Briens, a large, rambunctious, meddling family that they can "adopt" as their own for a few hours. Even I wish I were an O'Brien.
The O’Briens are GREAT.  I love that the family is so large and that you always have someone you can turn to.  But of course there’s always the risk that they’re going to gang up on you.  A SEASIDE CHRISTMAS marks the beginning of the “new” generation of O’Briens.  The book features Jenny (Connie’s daughter & Thomas’ step-daughter), who is the oldest of the O’Brien grandchildren.  Can you please give us an idea of what to expect?
As regular followers of the series may recall, Jenny Collins did not adapt well when her mom married the older Thomas O'Brien and especially when she discovered they were having a baby. Jenny's stayed away from Chesapeake Shores and made a name for herself writing songs for country superstars. Her Uncle Jake's wife, Bree O'Brien, lures her back to Chesapeake Shores to write the music for a Christmas play. When troubled country singer Caleb Green follows her to town to try to make amends for breaking her heart, Jenny has more on her plate than she ever expected, but in typical O'Brien fashion, holiday miracles abound for the perfect happy ending. I'm especially partial to country singers, so Caleb may be one of my favorite heroes.
I can’t wait.  Are we also going to be able to catch up on some of our favorite characters?  I mean really, when it comes to love and meddling in other’s affairs no one does it better than Mick and the rest of the family.
Absolutely! There's no way this family can sit on the sidelines when love is in the air or one of their own needs backup.
When I think about this series, I think of a series which is FULL of heart and love.  For you, what are some challenges involved in writing a series?
I always worry about keeping things fresh . . . and about remembering the names of my characters. Longtime readers know I slip up from time to time and they love catching the mistakes I've made. It's embarrassing.
LOL.  I’ve done that to a writer before.  But honestly, it wasn’t her fault.  I was a late reader and everything was fresh in my mind.  What can we expect next for you and Chesapeake Shores?
The next Chesapeake Shores book -- The Christmas Bouquet -- will be out in fall 2014. It features Caitlyn, one of Abby's twin girls, now all grown up. Her life takes a very unexpected turn! Before that book, though, there will be a reissue of Seaview Inn in January and a brand new sequel to that book, Home to Seaview Key, in February. And next summer, the first Sweet Magnolia book, Stealing Home, will be reissued in trade paperback with a new book in that series, Swan Point, coming out in trade paperback in August.
Oh my GOSH!!!!  I’m super excited to hear that there’s more Chesapeake books coming out.  I remember readers REALLY wanting to have the twins grow up and see what became of them.  I actually have Stealing Home.  I’ll be sure to read it before next August.  Once again, thank you SO much for stopping by and agreeing to answer some questions for me.  I’m looking forward to reading A SEASIDE CHRISTMAS.
I hope I don't let you or any other fans of Chesapeake Shores down with this addition to the series, Kim. I enjoyed seeing Jenny mature, make peace with her family and find her happily-ever-after with Caleb.
Oh my GOSH!!!!  I’m super excited to hear that there’s more Chesapeake books coming out.  I’m sure you won’t Sherryl. 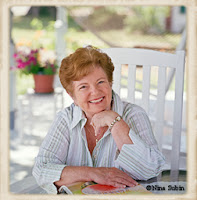 Author of more than 100 romance and mystery novels, Sherryl Woods grew up in Virginia. Over the years she had lived in Ohio and Florida, as well as California. Currently she divides her time between Key Biscayne, Florida and Colonial Beach, Virginia, the small, river-front town where she spent her childhood summers.
A graduate of Ohio State University School of Journalism, Sherryl spent more than ten years as a journalist, most of them as a television critic for newspapers in Ohio and Florida. For several years she also coordinated a motivational program for the more than 8,000 employees at the University of Miami-Jackson Memorial Medical Center.
Her first book, RESTORING LOVE, was published in 1982 by Dell Candlelight Ecstasy under the pseudonym of Suzanne Sherrill. Her second book, SAND CASTLES, under the pseudonym of Alexandra Kirk, was published later that same year by Bantam. She began using her own name when she moved to the Second Chance at Love line at Berkley Publishing. In 1986, she began writing full-time and also began her long career at Silhouette Books with the Desire title NOT AT EIGHT, DARLING, set in the world of television which she covered for so many years.
In addition to her more than 75 romances for Silhouette Desire and Special Edition, she has written thirteen mysteries — nine in the Amanda Roberts series and four in the Molly DeWitt series.
When she's not writing or reading, Sherryl loves to garden, though she's not at her best on a riding lawn mower. She also loves tennis, theater, and ballet, even though her top spin has long since vanished, she's never set foot on a stage, and she's way too uncoordinated to dance. She also loves baseball and claims anyone who's ever seen Kevin Costner in "Bull Durham" can understand why.
Places to find Sherryl Woods:
Website | Facebook | Goodreads