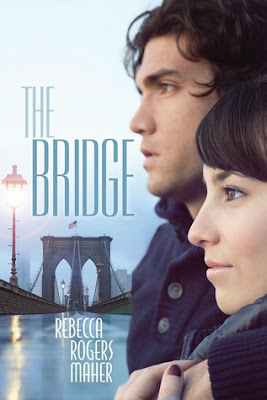 Henry meets Christa on the west tower of the Brooklyn Bridge, just as they're both about to jump off and kill themselves. Despite his paralyzing depression--and her panic over a second bout of cancer--they can't go through with their plans knowing that the other is going to die. So they make a pact--they'll stay alive for 24 hours, and try to convince each other to live.
From the Staten Island Ferry to Chinatown to the Museum of Modern Art--Henry and Christa embark on a New York City odyssey that exposes the darkest moments of their lives. Is it too late for them? Or will love give them the courage to face the terrifying possibility of hope?

REVIEW
Rebecca is like no author I've ever read.  Her stories are dark and thought provoking.  At times emotional, requiring you to look at yourself and your life.  Her female characters are strong, brash, take no prisoners, tell it like it is kind of ladies.  They have mouths that would make sailors blush.
THE BRIDGE is a dark story about two people finding each other amongst the billions and billions of people in the world, on their worst imaginable day.  The day they each plan to commit suicide.
Henry is thirty-years-old and by outward appearances has it all.  He's model gorgeous and wears expensive clothes.  Christa is a woman in her mid-thirties, who also by outward appearances has everything she needs.  But these two are hiding something from the world.  Henry is clinically depressed and has been for years.  Christa is a breast cancer survivor and has just discovered a new lump.  For these two, the only way they see out of the pain they're in is to kill themselves.
THE BRIDGE is told from the viewpoints of Henry and Christa over a 24 hour period.  The story starts out at 4am on a cool New York City Saturday morning.  With the Brooklyn Bridge as the location that will change the lives of Henry and Christa forever.  At 4:40 am, Henry finally climbs his way to the Brooklyn Bridge Tower, only to see a woman sitting on the edge.  Henry's first reaction is that he can't let this woman jump off the bridge.  Christa has the same reaction to Henry.  The two start talking and come to an agreement.  They will spend the day with each other, taking in the city, trying to convince the other that their life is worth living.  Come Sunday morning, they will each go their separate ways, hoping they succeed in saving the other's life.  Each knows that their mind is made up.  Their goal now on this Saturday isn't to end their life, but try to save the life of a stranger they believe has so much to offer.
This is the story of two people letting down their emotional walls for a complete stranger.  Unknowingly, allowing themselves to be free for just one day in their lives.  Through their own internal battles and battles with each other they find the one person they can be real with and don't even realize it.  Life can end in an instant so the question becomes, "Do I want to stay in this world and fight?  Or do I still want to end my existence?".
This is truly one of my FAVORITE Rebecca Rogers Maher books.
Rating: 4.5