Review ~ Catch Me a Cowboy by Katie Lane 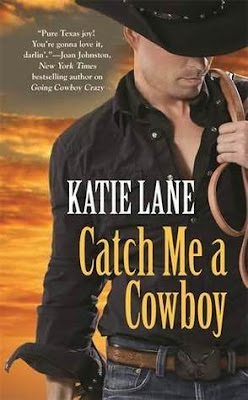 Shirlene Dalton has it all: a dream marriage to a man who spoils her rotten and the most outrageous mansion Bramble, Texas, has ever seen. But when her husband unexpectedly dies, Shirlene finds herself right back where she started-in a rundown trailer on the wrong side of the tracks. Never the type to let a little bad luck and a whole heap of heartache get her down, Shirlene is ready to prove to the local gossips she can make it on her own . . . until she ends up living next door to the most tempting cowboy in town.
Billy Wilkes has a score to settle and a plan to wipe Bramble right off the map. But when his sexy, redheaded neighbor figures out what he's up to, his good ol' boy charm won't be enough to save him. With the town on his tail, Billy will have to come clean quick-or kiss Shirlene goodbye.


I laughed so much reading this book.  I had tears in my eyes.  I read the book in two days, because I could not put it down.
Shirlene Dalton was a likeable character from the beginning in Going Cowboy Crazy.  A part of me thought she was a little shallow but I never fully realized that she was a true survivor, no matter what.
I read that Ms. Lane pictured Mayberry a little when she thought of Bramble, Texas.  I’m not old enough to actually remember the show and appreciate it, but I think Mayberry has nothing on Bramble.  I mean what will these people NOT do?
Previously, I wanted to get as far away from Bramble as I could.  But these CRAZY people have really wiggled their way into my heart.  Kenney Gene is insane (you find yourself going, really?  But sadly, I know there really is someone like him out there.), but he really tries to do good and be everyone’s friend.  Then you have Moses Tate who’s probably the oldest person in town.  Trust me, nothing gets by this old man.  He reminds of me of the old man from my small hometown.  You should never ever think that he’s asleep and has no clue as to what is going on.  The people of Bramble definitely have hearts as big as the state of Texas itself.
I never realized that cowboys (other than the Dallas kind) could be so lovable.  I think I want a Bubba.
I can’t wait to re-read the whole series again.
Rating: 5
Release Date: March 27, 2012
Book Length: 373 pages
Source: Author
Reviewed by: Kim
Reading Format: Available in eBook and Paperback

CATCH ME A COWBOY is available at Amazon and other retailers