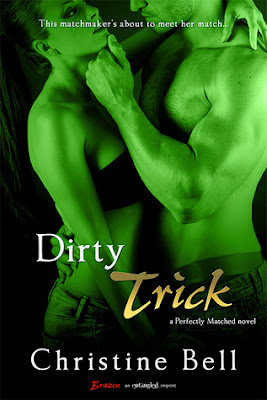 Grace Love is lousy with men. She can spot a match for someone else a mile away, and her balls-on instincts are why her matchmaking business is thriving, but finding her own Prince Charming? The only guy who makes her sixth sense tingle is her playboy best friend, Trick, and no way is she risking their friendship, no matter how hot she knows the sex will be.
SWAT officer Trick Matthews is a patient guy, but Grace’s inability to see what’s right in front of her is grinding on his last nerve. Yeah, he blew his shot at breaking out of the friend zone when he tamped down the urge to lick her from head to toe the day they met, but he’s got a plan that’ll change her mind. Incognito at Salem's hottest Halloween party, he’ll show her exactly how good they could be…and that he’s the man for her.


What would you do for a chance to be with the one person who refuses to give you a chance?  The person you know is right for you.  If you're Patrick "Trick" Matthews, you pretend to be someone else.  A masked stranger at a Halloween party.
Trick Mathews and Grace Love have known each other for a little over a year, ever since she moved next door to him.  Without question, Trick is a player and when he first saw Grace through her window, his player instincts kicked in.  But when he actually laid eyes on Grace in the flesh, his heart soared.  It's taken him a while to change his ways, but he has.  The problem is....Grace hasn't noticed.
Grace knows Trick is attractive.  She knows that he's a great guy.  Heck, he's even her best friend.  He knows her better than almost anyone.  She also knows that he's a player and she isn't going to risk getting hurt again, after her cheating, two-timing ex-fiance broke her heart and her spirit.  But, when a masked stranger comes on to her at a Halloween party, maybe just maybe it's time to have a little fun.
Catman, aka Trick got down and dirty with Grace at the Halloween party.  The problem now, how is he going to get her to give him, the actual Trick a chance.  Just when Trick is on the verge of coming clean, things blow up in his face.  Now, Grace isn't talking to him.  In fact, she's avoiding him like the plague.
At any given time, Trick's job as a SWAT officer can put his life in jeopardy.  The possibility that she might lose Trick forever, is the wake up call Grace needs.  But it seems that Trick has decided to forgo the hot steamy passion they shared.  In classic Christine Bell form, she has her hero Trick melting your heart in the end.
I loved this book and could NOT get enough of it.  Trick and Grace are so great together as friends and then as more.  Their intimate moments are hot and steamy and oh my God, did that just happen.  I still can't believe what Grace did at the Halloween party and afterwards for that matter.  I can’t wait to find out what’s in store for the next book in this series!!!!
Rating: 4.5
Release Date: September 23, 2013
Book Length: 250 pages
Source: Publisher ~ Entangled: Bliss
Reviewed by: Kim
Reading Format: Available only in eBook

DIRTY TRICK can be purchased from Amazon and other eRetailers