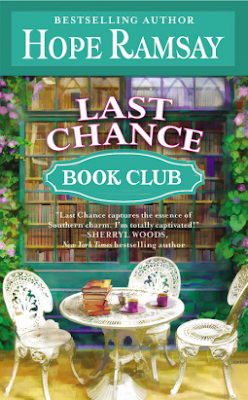 After a painful divorce, Savannah White wants nothing more than to find her happy place. So when she gets the chance to pack up her life -and her son - and move to the idyllic town where she spent childhood summers, she jumps at the opportunity. Last Chance is just as charming as she remembered. She's even invited to join the local book club, where talk soon turns to Savannah's plan to bring the ramshackle downtown movie theater back to life. A new challenge is just what Savannah needs to move forward.. . .
Dash Randall wants to put his fortune to good use, but he remembers Savannah as the bratty "princess" who descended upon him each June, causing no end of trouble. But the teenager he remembered has grown into a gorgeous and generous woman, and it isn't long before Dash finds himself wanting to make brand new memories with Savannah. But first, Dash and Savannah will need to make peace with their pasts to find a new chance for love.


While you don’t have to read the previous books in the Last Chance series, it helps to know who the characters are.  In this installment, we get to dig a little deeper into just who Dash Randall is.  I have to admit I was surprised by what I found.  Dash Randall, the alcoholic of Last Chance, South Carolina is SO much more than he appears to be.
Savannah White needs to get away.  Away from her mother, ex-husband and ex-mother in law.  What better place to go than Last Chance, South Carolina.  Savannah and her son Todd move in with her Aunt Miriam, after the death of Miriam’s husband, Harry.  She’s surprised to learn that her distant cousin and childhood tormentor Dash is also living there.  To say that these two dislike each other is an understatement.
Savannah’s grandfather left her The Kismet, an old dilapidated eyesore of a theater located in downtown Last Chance.  Dash puts aside his dislike of Savannah and along with the town rallies around her to help restore the theater and her dream.  Unfortunately, there’s something going on with the theater.  It seems someone doesn’t want Savannah to realize her dream.  Dash makes it his mission to get to the bottom of things.
In the midst of working on the theater, Dash and Savannah each realize their attraction for the other.  And when that attraction turns into love, it’s heartwarming.  As with all of the other books in the series, Last Chance Book Club is full of characters that you will love.  There’s also some little self help quotes to be found in the book.  I love those.
Rating: 4
Release Date: March 26, 2013
Book Length: 368 pages
Source: Forever Grand Central via NetGalley
Reviewed by: Kim
Reading Format: Available in eBook and Paperback

Books in the Last Chance Series