Review ~ TAKE ME by Diane Alberts 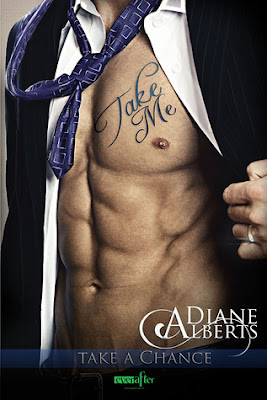 Married in the morning…
Professional heartbreaker Mike Worth thrived on the chase—and dancer Morgan Collins represented the ultimate prize. But there was no way he was going to throw away his single-man status…not even for an elusive redhead with sparkling eyes and mile-long legs. So how did he let one drunken Vegas night end with I do instead of hell no?
Morgan’s life revolved around her career and she had no intention of letting a man interfere—even if Mike made her question all her rules about love. At his urging, she reluctantly agreed to give their spur-of–moment marriage a chance. But once their trial-honeymoon ended, would she choose to follow the dance and leave her unforgettable husband behind?
REVIEW
First off...I have to say I LOVE the cover for Take Me.  I mean seriously who wouldn’t?
I feel a little behind the eight ball so to speak when it comes to this series.  I didn't read the first two books, only the third one and this one.  But from the third book (Take Me), I could tell Mike was going to be someone special.  And he was going to need someone just as special to capture his heart and let him know that it was okay to love someone.  Mike totally met his match with fiery red-headed Morgan.
There’s nothing like waking up in Vegas realizing you're married.  That’s exactly what happened to Mike Worth and Morgan Collins after knowing each other for a very short amount of time.  Mike is a middle school history teacher and Morgan is a Vegas Showgirl.  The two originally met at a bar while Mike was with his friends celebrating one of them getting married.  Mike mistakes Morgan for a stripper and the sparks fly for these two in more ways than one.

Mike comes across being an alpha player, but deep down he's a good guy with a heart of gold.  He's all talk with his red light, yellow light, and green light theory on relationships.  Mike and Morgan are so much alike.  I mean these are two people whose life goal is to NOT get married or have meaningful relationships.  Mike watched his mother lose herself to the bottle after his father left the family.  And in Morgan’s mind, her mother lost herself and her dreams to being married and having kids.
The story is told from the points of view of both Morgan and Mike.  I love that because you get to see what each is thinking.  See their hopes, dreams, and biggest fears.
One my favorite lines is from a drunk Mike, on why he’s marrying Morgan.. “I think I’m gonna fall head over ass in love with this woman, and she’s mine.  I love how determined she is to succeed, and I want to watch her grow. Help her.” ~ To that end, once these two realize they’re married, Mike begs Morgan to at least give them a week to see if their hot sexual chemistry will just fizzle out or if there really is something to their relationship.  I have to admit what happened between the pages of this book almost brought me to tears.
Sadly, this is the last book in Diane’s Take a Chance series, but it brings all the series’ couples together and gives the series a very nice send off.
Rating: 4


TAKE ME can be purchased from Amazon and other eRetailers

Be sure to check out the rest of the Take a Chance Series:
Talk about cover L-O-V-E!!!!!

Email ThisBlogThis!Share to TwitterShare to FacebookShare to Pinterest
Labels: 4.5 Stars, Diane Alberts, Entangled Ever After, Reviewed by Kim