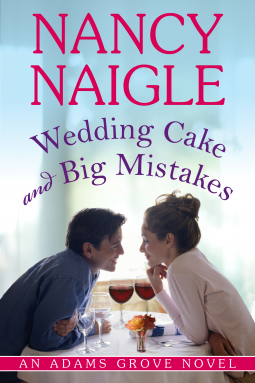 Welcome to Adams Grove…where the wedding cakes are sweet, but the recipe is murder.
For years, Carolanne Baxter dreamed of a life beyond Adams Grove. Being the daughter of the town drunk was no picnic, so when college offered her a chance for escape, she took it. Now Carolanne has returned home, finally ready to make amends with her father, Ben, and to celebrate the wedding of her best friends Jill and Garrett. Of course, the fact that Connor Buckham, her sexy new law partner and Garrett’s best man, happens to be the same guy the town matchmaker named as Carolanne’s perfect match…well! That’s just icing on the cake.
But Carolanne’s hopes for a fresh start are dashed when a dead body surfaces during Jill and Garrett’s wedding reception…and Ben Baxter becomes the prime suspect. The murder throws the town into uproar, threatening to destroy the tentative peace between father and daughter—and to derail the budding romance between Carolanne and Connor. Has the matchmaker’s perfect streak come to end? Or will the truth finally bring Carolanne the happy ending she’s dreamed of for so long?

Okay, so this was my first Nancy Naigle read.  I wasn’t sure what to expect.  In my mind I kept thinking cozy mystery.  Why?  I think because Nancy hangs out with the mystery people.  It doesn’t read like a cozy mystery, as least for me.  It has romance with a mystery undertone.  In fact, Nancy tells me it’s a contemporary romance, but she likes to call it a “small town suspense”.  Now, you’re asking WHY is this important... It’s just because I couldn’t really get a feel of the book.  It could possibly be because this is the third book in the series and I haven’t read the other two.  There were times when I just felt a little lost.  But with that being said, I really liked this book.
Wedding Cake and Big Mistakes just REALLY had me smiling.  Part of me felt bad waiting for the dead body to show up.  I know that sounds pretty sick.  But I just really wanted to know how all of these great characters I was falling for were going to play into a murder investigation.
Carolanne Baxter and Connor Buckham have known each other since childhood.  Each have moved away from Adams Grove, Virginia to big cities and returned for different reasons.  Carolanne returned to help her best friend Jill deal with the death of her grandmother, Pearl.  Connor took care of his mother who recently past away.  Pearl was apparently the matchmaker of Adams Grove and her last prediction was that Carolanne and Connor were perfect for each other.
Carolanne is a woman who is leary of love.  As a young child, she watched her father grieve after the loss of her mother by becoming the town drunk and not being able to take care her or himself.  In her mind, love isn’t worth losing yourself over, nor is it worth all the heartache that follows.  She’s also harboring a lot of resentment towards her father for the way he was when she was growing up.  At times, this is an issue between Carolanne and Connor since Connor is really fond of Ben and knows what a good person he is.  Connor is just so freaking sweet and nice; it’s not even funny.  Adams Grove is a small town and you definitely get the small town niceness through all the characters.
The mystery comes when a group of kids find a dead body behind the Artisan Center where Jill and Garrett’s wedding reception is being held.  Everything points to Ben being responsible.  Too many people are keeping secrets and things just aren’t the way they appear.  Constantly bumping heads, Connor and Carolanne come together in an attempt to clear Ben’s name and find out just who in fact is the murderer and why.  Now, the who done it may or may not be easy to guess but the reason will definitely be a surprise.
I am definitely looking forward to reading the next book in this series.
Rating: 4