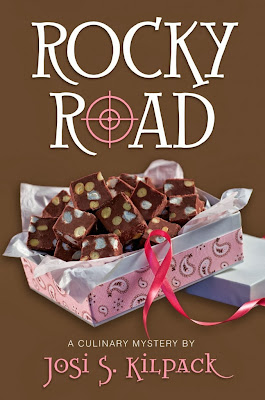 It was supposed to be a girls' weekend in scenic St. George, Utah, that would included shopping, trying out the local cuisine, and participating in a breast cancer fund-raiser. The fact that one of the organizers of the fund-raising event, a local doctor, had disappeared two months before was not supposed to be Sadie's problem.
When Sadie learns that her friend Caro and Caro's cousin, Tess, have started a grassroots investigation into Dr. Hendrick's disappearance, Sadie graciously refuses to be a part of it. With her wedding to plan and her most recent case still fresh in her mind, Sadie is determined to leave this case to the police—until she meets the ex-wife of the missing man.
How could she not ask a few questions ... that lead to more questions ... that lead to a small town and even more questions? When the local police ask her to be their eyes and ears, Sadie can't help but jump in with both feet. Before she knows it, she is on the rocky road of another investigation, following a convoluted trail of good intentions, hidden motivations, and philanthropy turned big business.

REVIEW
This is the tenth book in the Sadie Hoffmiller Culinary Mystery Series.  It's only the second book for me, so Caro is a new character for me.  Caro is actually Pete's cousin who is Sadie's fiancé.  I'm assuming Caro was in other books.
ROCKY ROAD finds Sadie again doing her own investigation into a mystery/crime.  This time, I can say Sadie was actually trying to respect the police and not get involved.  The storyline centers around the disappearance of Dr. Trenton Hendricks, who has been missing for two months and is now presumed dead.  Dr. Hendricks along with his partner Dr. Waters operates a cancer foundation that was instrumental in saving Caro's cousin, Tess' life.  Tess convinces Caro that something isn't right about Dr. Hendricks' disappearance and they have the idea to have Sadie help them.  When Sadie is reluctant to do so, Tess is a little witchy to say the least. I’ll just put it out there, I HATED Tess!!!
The book started out a little slow, bordering on being boring.  Tess’s attitude and bitterness didn’t help.  But once Sadie's detective skills kicked in, the book got so much better.  An investigation into the disappearance of a man turned out to be so much more.  For once, Sadie is actually asked by the police to help.  With her help, the investigation uncovers lies, deceit, theft, adultery, and possibly murder.  Sadie’s faith in God is called into question and she’s going to need her faith to help her get through this case.  Be prepared for twists and turns.  After all, the book is called Rocky Road.
Rating: 4
Release Date: August 26, 2013
Book Length: 356 pages
Source: Shadow Mountain Publishing via NetGalley
Reviewed by: Kim
Reading format: Available in eBook and Paperback

Blog Tour Giveaway $25 Amazon Gift Card or Paypal Cash Ends 10/6/13   Open only to those who can legally enter, receive and use an Amazon.com Gift Code or Paypal Cash. Winning Entry will be verified prior to prize being awarded. No purchase necessary. You must be 18 or older to enter or have your parent enter for you. The winner will be chosen by rafflecopter and announced here as well as emailed and will have 48 hours to respond or a new winner will be chosen. This giveaway is in no way associated with Facebook, Twitter, Rafflecopter or any other entity unless otherwise specified. The number of eligible entries received determines the odds of winning. Giveaway was organized by Kathy from I Am A Reader, Not A Writer and sponsored by the author. VOID WHERE PROHIBITED BY LAW.   a Rafflecopter giveaway