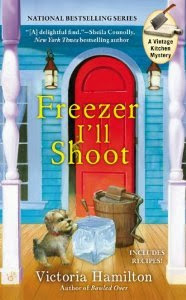 ICE COLD
Trying to escape her overbearing mother, vintage kitchenware enthusiast and soon-to-be columnist Jaymie Leighton retreats to her family’s cottage on Heartbreak Island. While there she hopes to write an article about the Ice House restaurant, owned by good friends and neighbors, siblings Ruby and Garnet Redmond. Once an actual icehouse, the restaurant is charmingly decorated with antique tools of the trade, including a collection of ice picks.
One night, while working on her article, Jaymie overhears an argument and, ever the sleuth, sets out to explore. But when she stumbles upon a dead body her blood runs cold. It’s Urban Dobrinskie, whose feud with the Redmonds is no secret, and he’s got an ice pick through his heart. Now Jaymie’s got to sharpen her sleuthing skills to chip away at the mystery and prove her neighbors’ innocence—before someone else gets picked off…

REVIEW
While Freezer I’ll Shoot is the third book in the Vintage Kitchen Mysteries Series, it is easily a stand alone.  I’ve wanted to read a book by Victoria Hamilton for a while now and I had no problem getting into this story.
Jaymie Leighton is a thirty-two-year-old single lady.  She lives in her childhood home in Queensville, Michigan.  She’s slowly getting over her relationship with her cheating ex and is trying to take things slow with her new boyfriend, Daniel Collins, a multi-millionaire software computer mogul.  Jaymie herself has several little odd jobs and is trying to run her upstart picnic basket rental company, a small blog on cooking and write a bi-weekly article called Vintage Eats for her local newspaper.
When Jaymie is around, it seems that murder follows.  In this installment of the Vintage Kitchen Mystery Series, Jaymie finds the body of Urban Dobrinskie between her and her neighbor’s backyard on Heartbreak Island.  Urban Dobrinskie is a man who isn’t very well liked, to say the least.  He’s abusive to his wife and teenage son and is pretty much just flat out mean to people.  As the list of suspects grows, so does the gossip on the small island of Heartbreak Island and its neighboring small town Queensville.  Leave it to Jaymie and her adorable yet protective three legged Yorkie-Poo, Hoppy, to find out who the killer is.
I loved this story because it kept me guessing as to who the killer was.  Just when I had an idea, someone else came to mind.  In this lovely tale of murder, greed, and secrets; you have to figure out just who you can and can not trust.  In her quest to find out answers, Jaymie inadvertently puts her life and that of Hoppy’s at risk.  But it’s up to sexy Detective Zack Christian to rescue her and save the day.  I can’t wait for the next book in this series.
Rating: 4
Release Date: November 5, 2013
Book Length: 304 pages
Source: Penguin/Berkley via NetGalley
Reviewed by: Kim
Reading format: Available in eBook and Paperback

Purchase from Amazon or your favorite Retailer