The Pleasures of Autumn by Evie Hunter Guest Post & Giveaway 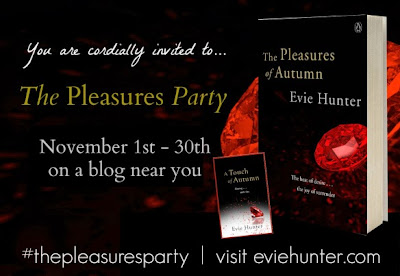 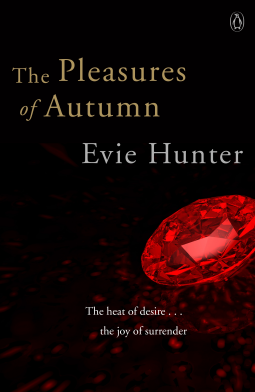 When museum curator Sinead O'Sullivan is charged with stealing the Fire of Autumn, a dazzling ruby with a history of violence and treachery, bail is set at one million Swiss francs. Investigator Niall Moore is hired to stop her fleeing and to find the jewel.
Their sexual chemistry is electric but logic says to ignore it. Desperate as she is to convince Niall of her innocence, Sinead cannot reveal everything she knows. And the feisty red-head's improbable tale tells him that she is not to be trusted.
Yet it's impossible to ignore the carnal heat between them. Niall, an expert interrogator, uses every trick of the trade - and every weapon in his erotic armoury - to get at the truth. Sinead, a fast learner, counters his every move with one of her own. Thief and thief-taker fight for dominance and there can be only one winner.
But what happens in their red-hot game of cat-and-mouse when criminals chasing the precious jewel come after Sinead ... and the stakes become deadly?

Name: Niall Moore. His middle name is a closely guarded secret, but he swears he won’t forgive his parents.
Height: 6’3”
Hair Color: Blond
Eye Color: Steel grey
Hometown: Skerries in the north of Dublin. Skerries was a well-known stronghold of Vikings for hundreds of years.
Profession: Former Irish Ranger, now the CEO and owner of Moore Enterprises, the most specialized personal protection and hostage rescue agency in Europe.
Vehicle: Wrangler jeep, well stocked with weapons, survival gear and computers.
Drink of Choice: His own home-made scrumpy. No one else can stand the stuff without a stiff whiskey first, but he loves it.
Suit and tie or Jeans and a t-shirt: Jeans for preference, although he occasionally has to wear a suit when dealing with museum directors and airline owners.  But nothing will make him cut his hair.
Boxers or Briefs: Boxers. He doesn’t have to boast.
Distinguishing features: If you see a Viking wandering around the streets of Dublin, London, Paris or Geneva, chances are it’s Niall Moore. In spite of his size, you probably won’t notice him immediately, he’s very good at blending into the background. But he’ll see you.
Special Skills: He’s a former Ranger, so weapons, physical strength and endurance, medical training, languages, and whole lot more he won’t talk about.  Plus the ability to make an appetizing meal from the contents of any freezer.
Ideal Woman: He’s looking for someone who can match him. He used to think that meant being able to carry a 50kg backpack across hostile terrain on a 30km march. Now he knows it means someone with courage and intelligence and the strength to use them.
Biggest Regret: A doctor got killed on one of his missions. She was disobeying his orders at the time, but to this day, he wonders if he could have saved her.Biggest Dark Secret: He actually likes the sweaters with dogs on them that his mother knits for him. But he’ll never admit it.
Biggest pet peeve: Food without proper labeling. Life as a celiac is hard enough without having to wonder if the cola he is drinking will knock him out.  Stupid people.  Lies and dishonesty.
Favourite pastime/hobby: Watching Doctor Who and geeking out about the time paradox.

The “Touch” books are short stories which are parallel books to the “Pleasures” books.  The reading order is up to you.

Thanks to the people at Penguin, I'm able to offer an international giveaway of a paperback copy of THE PLEASURES OF AUTUMN.  Good luck!!!!