Review ~ Stranded with a Hero Anthology 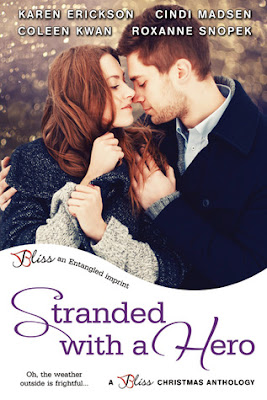 Getting snowed in never felt so good as boundaries are crossed, opposites attract, and friends discovering more promise a Christmas no one will ever forget.


A quote from Roxanne Snopek’s book, Saving the Sheriff sums up this anthology very well. “Life’s too short to say no when love shows up at your door.” Stranded with a Hero will give you four heroes and heroines you will root for and fall in love with. You will smile, laugh, and probably cry a little bit. Without a doubt, this book will put you in the Christmas spirit. If you haven’t read any of these authors before, this is a really great place to start. I simply love them all.

********************
Loving Mindy by Karen Erickson
Mindy can’t believe she's stuck with her ex–best friend—and the man whose heart she broke years ago—for the holidays, though the tension between them is more than enough to keep them warm. Josh Powers never forgot Mindy, but he can’t risk his heart a second time.

Loving Mindy ~ REVIEW
Loving Mindy by Karen Erickson is a second chance love story.  I was definitely looking forward to Mindy’s story.  In her siblings’ books (Jane’s Gift and Tempting Cameron) she provided all the words of wisdom while trying to hide her own pain and sorrow.
Mindy McKenzie Fenton and Josh Powers grew up together.  In fact, they were the best of friends until one day they were no more.  Each kept tabs on the other through friends and family.  Their new chance at love is the result of a horrible winter storm a couple of days before Christmas and a cat who appears to be smarter than his humans think.  Who says getting snowed in with no electricity is a bad thing?
I’m a huge fan of Karen’s Lone Pine Lake series, so my only complaint with Loving Mindy is that Mindy didn’t get a full story.  I so wanted more!


White-Hot Holiday by Coleen Kwan
Naomi’s sworn off men like Aaron—rich, cocky, and dismissive of holiday traditions. Aaron decided to spend Christmas in sunny Australia to avoid snowy New York, not to fall for the woman his best friend warned him away from. But when a volcano grounds him, Aaron and Naomi's relationship becomes eruptive.


White-Hot Holiday by Coleen Kwan is the story of Naomi Spencer, Luke Maguire’s niece from Real Men Don’t Quit, and one of Luke’s best friends, Aaron Cade.  Aaron is a high powered finance guy who lives in New York.  He is in Australia on vacation because his boss has ordered him to take some time off.  Naomi has recently returned to Australia, after following her ex-boyfriend to London.  She spent a year or so there, only to realize that she wasn’t happy with the relationship and what her ex expected her to do.  Since returning, Naomi has decided to forget about men.  Especially ones who are like Aaron with money and fancy jobs.
For Naomi and Aaron, the attraction is there instantly, but these two are from totally different worlds and continents.  Naomi is an elementary school teacher in Burronga, Australia who likes the simple things, isn’t concerned about money and flash and LOVES Christmas.  Aaron likes his finance job and being able to drive nice cars, eat at nice restaurants, and shower his loved ones with nice gifts.  But for Aaron, he doesn’t do all of these things to show people that he is better than they are.  He simply does it, because he wants to be a nice person.  But unlike Naomi, Christmas for Aaron is just a day he needs to get through.
Aaron is forced to spend Christmas with Luke and his family, and this is a chance for Naomi and Aaron to spend more time with each other.  It also allows Naomi’s family to see the sparks between them.  Unfortunately, Naomi’s past is still at the forefront of her mind and she refuses to change for a man again.  “Nothing’s impossible if you put your mind to it.”  And “Going after the person you love can be terrifying, but it can also be the best thing you ever do.”  In White-Hot Holiday, Aaron and Naomi are going to realize that this Christmas is the best yet.

********************
An Officer and a Rebel by Cindi Madsen
The last person police officer Nate Walsh expected to discover in a snowstorm is his brother's ex and former town rebel, Kelsey Cooper. She’s his complete opposite and totally off-limits, but as they wait out the storm together, all he can think is how he wishes she'd stay forever.


An Officer and a Rebel ~ REVIEW


This was my first time reading a book by Cindi Madsen.  I don't know what I was thinking by waiting so long.  An Officer and a Rebel is a second chance romance for the ages.
Nate Walsh is a police officer in his small hometown of Marion, North Carolina.  Kelsey Cooper is now a hairdresser and former rebel of Marion.  In what was supposed to be a trip down memory lane for Kelsey who is just traveling through town on Christmas Eve, turns out to be a memory she will never forget.
While Nate and Kelsey didn't previously have a relationship, Nate did have a crush on Kelsey, who was once his younger brother's girlfriend.  When an accident and a bad winter storm traps these two together, falling in love is the last thing on either of their minds.  But as time goes by and they get to know each other, forever love becomes the number one thing on their minds.
In typical Entangled Bliss fashion, be prepared to cry and fall in love with Nate and Kelsey.


Saving the Sheriff by Roxanne Snopek
Frankie Sylva was determined to free the reindeer cruelly held for a holiday roadshow, even if it meant risking her own life. Deputy Sheriff Red LeClair set out to save a stranger in a snowstorm, never expecting he’d be the one to be rescued.


Francesca “Frankie” Sylva is a traveling teacher and overall protector of the underdog.  Rudolph “Red” LeClair is the sheriff of Lutherton, Montana.  A criminal act done for a good reason and a blizzard combine to make this a Christmas Frankie and Red will cherish forever.
Frankie and Red are a couple you will root for and fall in love with.  Frankie is a loner who has yet to set down roots and thinks she pretty much has her life figured out.  Red is dealing with a divorce that he never wanted and just wants to get through this Christmas.  With Carson and Rory away on a Christmas vacation, Red is tasked with the job of taking care of the ranch and the animals who live there.  While making his rounds, he comes across a trespasser that he knows is hiding something.  With the roads closed due to a storm, he has no choice but to have the trespasser, aka Frankie stay at Three River with him.  When the lights go out, things start to heat up for these two.
Saving the Sheriff brings back Zach, Des, Blythe and Bliss from the previous books in the Three River Ranch series for cameo appearances.  When I think of Roxanne and her Three River Ranch series, I think humor and the gospel according to Bliss Henderson, the housekeeper of Three River Ranch.  This book delivers all in spades.  Be ready to put a smile on your face because this story is definitely going to do it.


Purchase Stranded with a Hero from Amazon or your favorite eRetailer