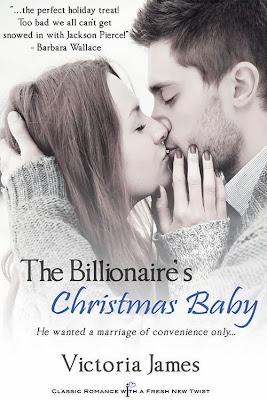 An Entangled Christmas Classic …
Jackson Pierce didn’t make his fortune entertaining every half-cocked idea, especially one involving diaper changes.  Not even the cute brunette who links him to the baby in her arms can crack his icy heart.  A baby on the doorstep is the least of Hannah Woods’s problems—she has to find the baby’s uncle, or the child will end up in foster care.  She sleuths her way to the reclusive CEO’s doorstep only to find six feet of holiday sexy—and a door slammed in her face.  But when Jackson comes around and urges they marry for little Emily’s sake, Hannah finds herself falling for the jaded billionaire and wishing for a holiday miracle of their own…

The Billionaire’s Christmas Baby is a story I REALLY wanted to read.  After reading one of Victoria James’ other books, I pretty much just had to get all of her books.  I must say this book did EXACTLY what I needed it to do.  I’ve been reading like a robot for weeks now and I pretty much was looking at reading like a chore and I wasn’t enjoying it.  I needed this book to pick me up and make me smile and fall in love with reading again.  It definitely did that.
In The Billionaire’s Christmas Baby, Victoria James has given you two characters who are each in need of healing, learning to trust, finding love, and a family they each have craved for a long, long time.
Jackson Pierce has tried to leave his past behind in him.  After losing his mother at a young age and protecting his younger sister from their abusive father, only to lose her to drugs, Jackson has left his family and poor childhood behind.  He is now the founder and CEO of a large computer software company.
Jackson has no idea how much his life is about to change when he answers the knock at his getaway cabin door.  His unwelcomed visitor is none other than Hannah Woods, a social worker who has committed the professional no-no of becoming overly involved in one of her cases.  Hannah discovered Baby Emily abandoned on the church steps by her mother, Louise.  There was a note attached to her basket telling Hannah to find Emily’s uncle and that he will raise her.  Hannah does just that against protocol.
When a blizzard traps Jackson, Hannah, and Emily at his cabin, the attraction between Jackson and Hannah builds as does the tension of Jackson refusing to adopt Emily.  With the possibility of one of these three dying in the winter storm, one will come to a life changing decision and have to find a way to make the other trust in the love they are starting to form.  One will need to embrace their past in order to move forward.  The other will need to let go of the past in order to have the life and future they have always dreamed about.
This is truly a story that will pull at your heartstrings and make you believe in the power of faith, love, and the magic of Christmas and all it entails.
Rating: 5
Release Date: November 7, 2012 (Re-released December 9, 2013)
Book Length:  184 pages
Source: Personal Purchase
Reviewed by: Kim
Reading Format: Available only in eBook

Purchase from Amazon and other eRetailers