5 Star Review ~ FALLING FOR HER FIANCE by Cindi Madsen 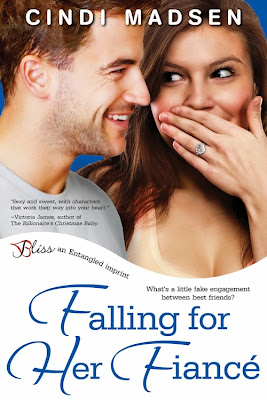 Danielle and Wes have been best friends since college, so when Wes needs a date for his sister’s wedding and Dani needs a partner for her company’s retreat, they devise the perfect plan: a fake engagement to get through both events unscathed. Adrenaline-junkie Wes can prove to both his ex and his family that he’s well and truly moved on, and serious-minded Dani can prove to her boss that she’s worthy of the promotion he seems to only want to give to a family-oriented employee.
But amid the fake swoons, fake kisses, and forced proximity, neither expects the very real feelings that develop. There’s nothing more dangerous than falling for your best friend…but what if the landing is worth the fall?


Have you ever read book and had a character mentioned in it and then just HAD to see if the character had his or her own book?  Well, that’s exactly what happened to me.  I read An Officer and a Rebel, which is part of the Stranded with a Hero anthology and Wes was mentioned in the book for all of about ten seconds.  In that short time frame, I was in love.  So the hunt to see if he had a book already or one coming was on.
Falling for Her Fiance is the story of two best friends finally realizing that the other is the person they love most in the world and who they want to spend the rest of their life with.  Danielle (Dani) Vega and Wes Turner have known each other since college.  For years they have maintained their “friends only” status.  But things are about to change.
Dani’s company is holding a couples retreat.  Only problem is Dani doesn’t have a plus one.  She’s sure that if she was married or had a significant other, she would be a shoo in to get the promotion up for grabs at her very family-oriented company.   Wes was dumped by his ex-fiance months ago.  His family still gives him pitiful looks.  To make matters worse, his baby sister is getting married and the ex is a part of the wedding party.  While on a phone call with Dani, Wes gets the idea for them both to pretend to be an engaged couple at both events.  What starts out as a little innocent lie/game, quickly becomes more than either one of them saw coming.
Falling for Her Fiance is a truly sweet romance that will have you smiling immediately.  Wes and Dani are best friends and the love and understanding they have for each other as friends truly shows through.  This book encompasses ALL the things I love about Entangled’s Bliss imprint.  Now, to catch up on the rest of the series.
Rating: 5
Release Date: January 14, 2013
Book Length: 220 pages
Source: Personal Purchase
Reading Format: Available only in eBook

Purchase FALLING FOR HER FIANCE from Amazon or your favorite eRetailer