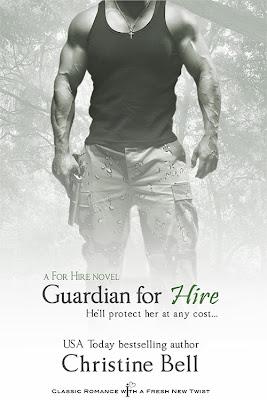 Sarabeth Lucking's life is turned upside down when the couples’ retreat she works for winds up embroiled in the biggest scandal of the year. With her reputation in tatters, she can’t imagine things getting worse, until her former co-workers are rubbed out, and a bad-ass, ex-Army Ranger shows up hell-bent on protecting her. She shows him the door, perfectly content with letting him go find someone else to brood over. Right up until her car explodes into a ball of flames...
Gavin McClintock grew up on the streets of Edinburgh, so protecting Dr. Stick-Up-Her-Rear isn't on his bucket list. Still, a promise is a promise, and, after her brush with death, he’s going to do whatever it takes to keep Sarabeth safe. When she finally gives in and shreds her librarian-in-mourning look in favor of a sex kitten, the revealing clothes and sexy new hairdo unleash the spitfire she’s been hiding beneath that shell of propriety.
Maybe the doc isn’t the only one in need of protection…


Guardian for Hire is the second book in Christine Bell’s For Hire Series.  This is a contemporary romance with suspense elements.  Heavy focus on the romance part!  While it is the second book in the series, it is completely stand alone.
Christine brings her typical writing style of humor and hot steamy moments to this book.  Sarabeth Lucking and Gavin McClintock are both characters with less than perfect childhoods and baggage.  But they aren’t characters that you will feel sorry for.  They’re characters that you will respect, fall in love with, and hope will have their happy ending.
After working for The Healing Place and having her world fall apart after the scam being perpetrated by the founder of the company was discovered, Sarabeth has been trying to rebuild her life and her career as a psychologist.  But things for Sarabeth will never be the same.  Over the course of the last few weeks and months, employees of The Healing Place have been dying.  One death is considered to be an accident.  But when the bodies start to pile up, you have to wonder who is after the employees and why.
Gavin McClintock is an ex-Army Ranger and is now a partner in McClintock and Saunders, a security firm.  When his friends Owen and Lindy Phipps become concerned about Sarabeth, they ask Gavin to protect her.  Sarabeth and Gavin’s meeting is bad from the start.  Sarabeth doesn’t want someone telling her what to do and is sure that no one is after her.  Just as Sarabeth is trying to blow Gavin off, her car explodes and Gavin leaps into action.
As the search for clues turn cold, the attraction between Gavin and Sarabeth reaches an all out boiling point.  When the possibly that Sarabeth’s life can be spared, Gavin does whatever is necessary to insure that it is.  He just doesn’t expect to find a gun pointed to his head.  In the end, it will take all the skills Gavin has taught her for Sarabeth to finally get her man.
Rating: 4
Release Date: January 13, 2014
Book Length: 201 pages
Source: Publisher ~ Entangled: Indulgence
Reviewed by: Kim
Reading Format: Available only in eBook

Purchase Guardian for Hire from Amazon and other eRetailers

The For Hire Series: