Review ~ DOWN ON HER KNEES by Christine Bell 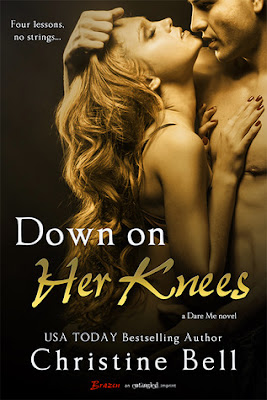 Four lessons, no strings…
Detective Rafe Davenport has always made Courtney DeLollis uneasy. While her instincts whisper, Touch him, her mind says, Run. But since she learned that he’s dominant in the bedroom, she hasn’t been able to forget about it. She should be appalled—she knows all too well what happens when a man has too much control—but a deeper, darker part of her is fascinated...
And so is Rafe. The sexual tension between them is thick enough to touch, and damn, does he want to touch. So he suggests something that will benefit them both. Four scenes—because anything more is a relationship, and Rafe won’t go there ever again. Each scenario is designed to tease and torment. To show Courtney that with every submission comes the reward of scintillating pleasure. But once he has Courtney down on her knees, Rafe realizes that she might be the one woman capable of bringing him to his…

I’m a huge fan of Christine Bell and her Dare Me Series.  However, when it came to reading Down on Her Knees, I wasn’t sure if I wanted to read the book.  I mean, Rafe Davenport is seriously into the BDSM thing and he kind of scared me.  I kept thinking he was going to be too dominant.
Five years ago, Rafe Davenport’s life got turned upside down.  Living with guilt, he decided to become a police officer to protect people.  At the same time, he decided to never let another woman get close to him.  Rafe has a system.  He will have four scenes with a woman and then that is that.  They go their separate ways.  He even has a contract.
Over the past couple of years, Courtney DeLollis an ER nurse has lost a lot due to her ex.  She is slowly re-establishing herself and putting her life back together.  When she meets Rafe at a gathering with some friends, she’s very vocal that his BDSM lifestyle is only a step away from being abusive.  She’s appalled when Rafe offers her a chance to experience what BDSM with him is all about.  However, there is no denying that she’s attracted to him.
Rafe oozes sex appeal and it seems like everything he does is like silk going over your skin.  He isn’t prepared for the feelings and emotions Courtney brings out of him.  For her part, Courtney finds that she loves the way Rafe treats her during their scenes and finds them to be freeing.  In what was supposed to be only four scenes and then a possible friendship, since they share the same friends, things turn out to be so much more.  During their time together, Courtney manages to get past the walls Rafe has built up.  At the same time, Rafe manages to give Courtney back her self-esteem, her courage, and the security she’s been missing.  I love these two together.
Rating: 4
Release Date: February 24, 2014
Book Length: 200 pages
Source: Publisher ~ Entangled: Brazen
Reviewed by: Kim
Reading Format: Available only in eBook

The Dare Me Series: