An interview with Kate Meader, author of HOT AND BOTHERED 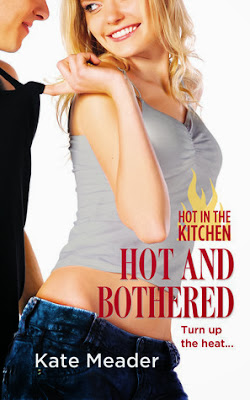 Hot and Bothered (Hot in the Kitchen, #3)
by Kate Meader
Published by Forever Romance
Releases ~ March 4, 2014
A Fire They Can't Put Out . . .
Although her baby boy keeps her plate full, Jules Kilroy is ready to take her love life off the back burner. Despite a bevy of eligible bachelors, it's her best friend, Taddeo DeLuca, who is fueling her hormones with a generous serving of his mouth-watering Italian sexiness. But Jules learned her lesson once before when she went in for a kiss, only to have Tad reject her. She's vowed never to blur the lines again . . .
After a lifetime of excuses and false starts, Tad has finally opened a wine bar, a deal made even sweeter when Jules joins his staff. Lovers come and go, and he's had his share, but friendships like theirs last forever. Still, ever since he tasted her luscious lips, he can't stop fantasizing about what could be. Then she joins an online dating site-and the thought of his Jules with another man makes Tad's blood boil. Even if he gets burned, Tad can't stop himself from turning up the heat this time.

What scene was the hardest to write?
Throughout HOT AND BOTHERED, Tad harbors a secret that keeps him stunted in all areas of his life and every year on the anniversary of his parents’ death, he goes on a bender. This usually takes him away for a few days but this year, he’s at home—and Jules is on hand, ready to pull him out of it. But he’s not having any it. He wants to wallow, he wants to hold onto the pain because it keeps his guilt tangible. This scene was so emotional to write as Jules tries to break down Tad’s walls and get him to lay it on the line. Tears were shed by both my characters and me!
In the book Jules struggles with insecurities about her dyslexia and being a good mom to her son Evan—what do you hope readers can learn from her story?
In HOT AND BOTHERED, Jules has mostly come to terms with her dyslexia but it still affects her self-esteem and makes her question if she’s good enough to follow her dreams. She worries about all the things you’d expect of a young, single mom: is she feeding Evan the right foods? Is she spending too much time thinking about her hopes and dreams at the expense of being a good mother? And is she looking for a guy for the right reasons? I hope readers can learn that it’s okay to want it all—the job of your dreams, the man of your heart, and a great family life. It’s not greedy to need that kind of completion.
Jules ventures into the world of online dating briefly in the book. If you were a single gal, would you ever try online dating?
I’d like to think I’d be brave enough to do it. I’m not a bar or club person and really, I’ve no idea how people meet these days outside of work or Starbucks (which is where I met my husband). So, online dating seems like a logical way of lining up potential mates!
Which of the characters in the series is most like you? Which one is least like you?
I think I’m closest to Shane, my Irish pastry chef from ALL FIRED UP. First off, I’m a gen-u-ine Irish person. I’m also fairly easy going and I try to see the funny in the serious. As for who I’m least like? That would be Cara, Shane’s heroine, who is pretty rigid and controlling. She makes great strides in her story arc but Rome wasn’t built in a day!
What’s next for you?
I’m currently working on two new series: one is about a trio of Texan tycoons who have all been unlucky in love; the other will center on a Chicago Irish family of firefighting foster siblings. The first books in both series should be out in late 2014.

Check out the Hot and Bothered excerpt and giveaway here. 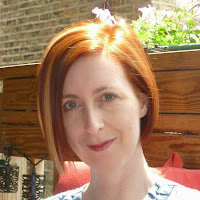 Kate Meader writes contemporary romance that serves up delicious food, sexy heroes, and heroines with a dash of sass. Originally from Ireland, she now makes her home in Chicago, a city made for food, romance, and laughter - and where she met her own sexy hero. When not writing about men who cook and the women who drool over them, she works in an academic library.