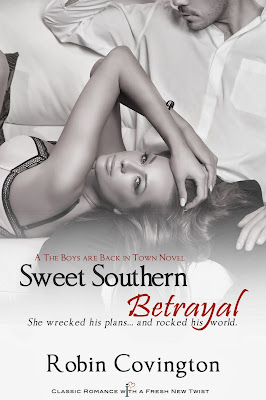 Privileged and ambitious attorney Teague Elliott is on the fast-track to getting everything he wants. All he has to do is stay on the straight and narrow and a high-profile political career is his for the taking. Until he wakes up naked with a Vegas showgirl...
Risa Clay has worked hard to put her showgirl past behind her and start fresh. But she owes ten grand to the wrong people, and to pay off her debt, she agrees to betray a stranger. . .but she ends up with a husband and guilty conscience.
Savvy and determined, she double-crosses the mob, goes on the run, and turns up on Teague’s doorstep armed with a dangerous secret, a marriage license, and the power to ruin his well-planned future. She thought using Teague again would be easy, but the passion that exploded between them in Vegas didn’t stay in Sin City and betrayal is the last thing on her mind.
Now Teague has to choose between the future he’s planned for all his life, or the one with Risa that he can’t turn away from.

Sweet Southern Betrayal is a sweet story about betrayal that will surprise you.  It’s a great book with very touching moments.
Teague Elliott is about to be become the youngest partner at a large law firm.  The job is his whole life, and this position is what he's been striving for.  At least, that's the person he was until he spends one night in Vegas.  He's there for his sister's wedding to his very best friend.
Teague wakes up to a very beautiful Risa Clay who is a showgirl dancer.  Teague doesn’t remember her at all and they part to never see each
other again.  Until....
Risa shows up in DC where Teague lives.  He's stunned to say the least, but the next words out of her of her mouth will even shock you more.  She needs his help and has no where else to turn.  Risa was scared when she started her initial plans to set Teague up, but she was desperate.  When it comes down to it, she can't follow through with those plans.  This is only the beginning and more excitement comes into this book.
When Teague finds out what she has done, he loses it; but one moment speaks volumes.  Teague’s career is everything, but when something life threatening comes into play what's more important?
I was on the edge of my seat wondering what would happen next.  I really enjoyed this book and will now read the other two preceding books.
This was my first book by Robin Covington and I truly loved it.
Rating: 5
Release Date: January 13, 2014
Book Length: 161 pages
Source: Personal Purchase
Reviewed by: Mona
Reading Format: Available only in eBook

Check out an excerpt from Sweet Southern Betrayal here.

The Boys Are Back in Town Series: