A MUST READ ~ SIMPLE MAN by Lydia Michaels 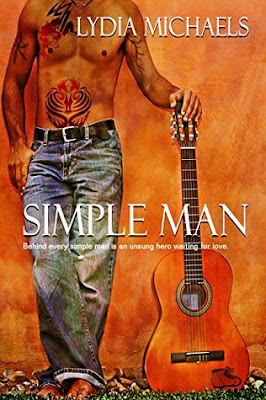 
Behind every simple man is an unsung hero waiting to be loved.
Months after Shane Martin’s sister vanishes, life crashes down and he finds himself the guardian of a nephew he never knew existed.  Blissfully ignorant, Shane trades in his musician status, full of late nights and fast women, for midnight feedings and lullabies.  But when Kate McAlister, his prissy, stuck up caseworker, arrives unexpectedly, he realizes he could lose everything.
Kate isn’t impressed by Shane’s messy bachelor pad, rocker image, or sexy tattoos.  As a matter of fact she finds it all very sophomoric.  The sooner she’s off the case the better.  Everything from his long hair to his sarcastic attitude threatens her professionalism.  But when he lowers his guard and asks for help, she discovers a side to this tattooed musician she can’t resist.  Behind this simple man is an unsung hero.

REVIEW
When I originally read an excerpt from Simple Man, I wanted to read the book. Then when I read a character interview, I really really wanted to read the book. Sometimes, as readers we set ourselves up to make a book out to be more than what it is.  Then when we read the book, we are completely let down.  This was NOT the case with Simple Man.  I loved the book from start to finish.
At the age of seventeen, with the death of his parents, Shane Martin became the guardian of his eleven-year-old sister, Noel.  In order to make ends meet and keep a roof over their heads, Shane dropped out of school and took a job working in construction.  Things were always tight, but at least they survived.
Fast forward ten years, and the siblings who were once close aren’t really close any more.  Noel reaches out to Shane for help, but he wants answers.  Answers Noel will not provide.  When she doesn’t get the help she wants, she disappears.  For months, Shane looked for her to no avail.  Eight months later, Shane receives a knock on his door informing him of Noel’s death.  He is later approached by the state and informed that Noel named him as the guardian of her son, a child Shane knew nothing about.
Without hesitation, Shane took in his nephew (Shane Logan).  He did a 360 with his life.  He stopped drinking, smoking, and partying with women.  Shane went from having only Wild Turkey, beer, and week old Chinese Food in his refrigerator to having a pantry full of real healthy food.  He was determined to show the state and Kate McAlister, his caseworker who hated him, that he was the right choice for Logan.
Shane likes to say that he’s just a simple man, but he’s so much more than that.  He’s charming, loving, and will do whatever is necessary, legally, to take care of his nephew.  When Logan gets sick, Kate is the first person Shane calls for help.  This turns out to be the turning point in their relationship and allows Kate to start to fully see what type of man Shane really is.  But alas, sometimes things aren’t meant to be and Shane’s future with Logan gets threatened.  It’s going to take courage, strength, determination, and a little humbling for things to work out.
Simple Man is a must read that will touch your heart and love strings.  Shane may think he’s just a simple man and Logan may not have been born his son, but in Shane’s words, he was born to be his father.

To read my interview with Shane and Kate, click here.