A Roux of Revenge with Connie Archer, The Interview 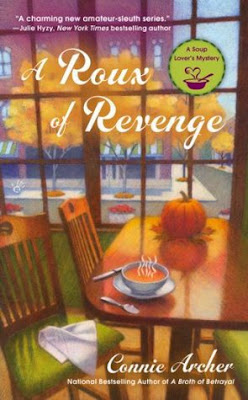 Snowflake, Vermont, is known for its skiing in winter—and its soup all year round, thanks to Lucky Jamieson’s By the Spoonful Soup Shop. Autumn brings golden leaves, pumpkin rice soup, the annual Harvest Festival… and murder.
Lucky’s soup shop is busier than usual this October, with groups of itinerant travelers in town to work the Harvest Festival. One newcomer seems to take a particular interest in Lucky’s young waitress, Janie, spying on her from across the street. Is the stranger stalking Janie?
After an unidentified man is found murdered in a van by the side of the road, simmering suspicions about the travelers are brought to a boil. But when Janie is put in harm’s way, Lucky must join forces with the travelers to turn up the heat on a killer….

You can see my review of A Roux of Revenge here.

Hi Connie.  Thank you for taking the time to join me today.  When you wrote A Spoonful of Murder a couple of years ago, did you expect it to turn into a series?

Actually, I knew from the beginning that this would be a three book contract, so yes, I did know.  But I was amazed and thrilled that the first book, A Spoonful of Murder, did so well, and then the second one too, A Broth of Betrayal.  And because these were so well-received, I was offered a contract for two more.  I'm currently working on number five in the series.

A Roux of Revenge is my first read by you. Could you please tell me about Lucky and the town of Snowflake?

Lucky was born and grew up in Snowflake, Vermont and couldn't wait to escape her small town roots.  She went away to college in Madison, Wisconsin, graduated and worked at odd jobs for several years.  She was at that turning point in life that, I think, hits everyone around the ages of 28 to 32, somewhere in there, where we've perhaps hit certain marks that were expected of us, and are anticipating the next phase of "grown up" life only to discover that nothing important is really happening.  Life just seems like a long series of dead end jobs.

That's where Lucky is when she learns her parents have been killed in a car accident on an icy road.  Her entire world collapses and everything she felt was so important is no longer so.  She makes the decision (with great trepidation and doubt) to return home and take over her parents' business, the By the Spoonful Soup Shop.  She also finds she's the only one left to look after her elderly grandfather, the last of her family.  The tone of this series is not one I think usually found in cozy mysteries.  Lucky finds herself grieving and suffering from guilt that she had not spent more time with her parents.  The restaurant is in trouble when a dead tourist is found frozen in a snowbank and it seems as if everything her family worked for will be lost.

Inventing the town of Snowflake was a great deal of fun for me.  I grew up in New England and know it well, so I was able to play with all the elements -- a white-steepled church, a Village Green, streets named after trees, a 'Colonial Road' and a 'Pilgrim Trail.'  The soup shop is a central meeting place, gossip runs rampant, strangers are regarded with suspicion, and everyone knows everything about everyone else.  I think of this series, not so much as a cozy series, but more as a village mystery.  Technology is kept to a minimum, relationships are terribly important and the psychology or motivation behind the crime is paramount.  A few readers have even written to tell me they wished they could live in Snowflake!  It was a wonderful thing for me to hear because that's the kind of setting I wanted to create.  It's a peaceful little place . . . in spite of the high murder rate.

From the series, do you have a favorite book or character and if so why?

That's really hard to say, because I love all the books for different reasons.  Some were more of a challenge to write than others, and required some research, but they all have a place in my heart.  As far as characters go, I think Jack, my protagonist Lucky's grandfather, a Navy vet who tells time by the bells, is right at the top of the list.  Other people have told me they fell in love Jack too.  And then, Sophie, Lucky's best friend, who's more outspoken and confrontational than Lucky -- I love her too.  She gets to say all the things my protagonist can't say for various reasons.  So I can have a lot of fun with her.

I'm always curious as to a writer's writing process.  Are your books character driven or are you in full control of planning everything out?

I do like to plan, it makes me feel a little safer as I go along, but once the crime and the victim(s) and killer are decided, it's really the characters who drive the story.  What's important is not so much the crime itself, but the characters' investment in their village and their way of life and how affected or endangered they are by the crime.  And every character is useful for various reasons.  Horace, a retired professor, who moves to town, is a walking encyclopedia and very handy for interjecting all sorts of historical tidbits and knowledge when needed.

As much as I rely on an outline for pacing and structure, it's flexible.  What I sometimes decide from the outside looking in can often be improved during the writing process as new ideas come up.

Did you face any challenges writing A Roux of Revenge?

Roux flowed very easily, the story at least, but I had to plan out certain timelines because the current crime was directly related to an old crime and I wanted the distance in time and the complications to be believable.  I also did a lot of research on the megaliths of New England, which most experts don't even talk about.  The fact that prehistoric structures (non-Native American) exist in the U.S. has only been admitted in recent years.  I grew up in New England and I was vaguely aware of these sites, but as I delved into the subject more, I was awestruck at the number of sites in New England alone.  The travelers who come to town in Roux believe that the "Stones," as they are called, were built by their long-distant ancestors.  So it was really fun to be able to use some (only slightly revised) New England history.

Are all the soup recipes in the books your creations?

Yes, I do love to make soups.  Most are my inventions, just a few are my versions of some basic recipes.  The hardest part of submitting these recipes for the books was being specific and writing everything down, since I usually never bother to measure anything.  Conveying a recipe that's brand new to someone else requires attention to detail -- making sure the ingredients and the amounts are correct.  In a way it was like making certain soups for the first time.

I'm usually a romance reader. I have however read several cozy mysteries/amateur sleuth books. I'm curious as to why authors tend to put in a little romance with tension into their cozies?

That's an interesting question, Kim and to be honest, I hadn't given it a lot of thought.  I know editors tend to like that additional element in mysteries if it's possible to work it in, and lots of readers love romance in any form.  One very good reason is that it definitely spices things up, especially with a young protagonist.  In cozies of course, the romance should take a positive course and have a happy ending, even if there are ups and down.  In the noir or hard-boiled school of detective fiction, the guy falls in love but can never get/keep the girl, so he must carry on as a true lone wolf -- i.e., Jack Reacher, Sam Spade, Kurt Wallender to name a few fictional characters.  But that being said, the element of romance serves a great purpose in that it gives the reader a much deeper insight into any character, no matter what the genre.  Any protagonist in love is much more vulnerable and perhaps readers can identify with that character all the more.  They can think, See? Ms. Wonderful is not perfect, she feels clumsy and awkward and jealous and unsure of herself and all those uncomfortable things we can all identify with.

Thank you so much Connie.  I enjoyed reading A Roux of Revenge.  I’m looking forward to reading the previous books and the upcoming books in the series.

Thanks so much for this interview, Kim!  I’m glad you enjoyed your visit to Snowflake, Vermont and meeting all the denizens of the village!

Connie Archer is the national bestselling author of the soup lover’s mystery series from Berkley Prime Crime: A SPOONFUL OF MURDER and A BROTH OF BETRAYAL. The third in this series, A ROUX OF REVENGE will be released in April 2014.

Connie was born and raised in New England. She now lives on the other coast.

Thanks to Connie, I’m able to giveaway a copy of A Roux of Revenge with a little swag.  Contest is open to US residents only.  Good luck.  You can follow along with Connie’s A Roux of Revenge blog tour here for more opportunities to win.