Review ~ WILD ABOUT HER WINGMAN by Robin Bielman 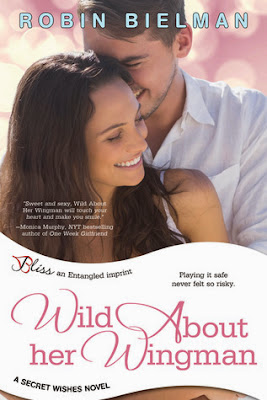 Playing it safe never felt so risky.
Erin Watters is her small town’s resident wild child—she doesn’t do boring, and after having her heart annihilated, she definitely doesn’t do relationships. Her friends have other ideas, though, and when they throw down a matchmaking challenge, impulsive Erin can’t ignore it. Even when the annoyingly hot Troy Strieber accepts the matchmaker role…
As a rescue paramedic, Troy’s used to watching out for people. Never mind the bet he made with his buddy to play Erin’s wingman. But the more time he spends with the sexy, charismatic woman, the more he discovers a side of her she doesn’t let many see. Soon what started as an innocent game of matchmaking has them both thinking about the person right under their nose. But Troy’s a play-it-safe guy, and he won’t let a woman who lives for risk ever steal his heart.

Robin Bielman has managed yet again to deliver a hero who's easy to fall in love with and a heroine you would love to have as a friend.
Erin Watters has the reputation as being Cascade's "wild child".  She loves the outdoors and high altitude sports.  In fact, she finds the sports to be fun and freeing, something she discovered after her college sweetheart cheated on her and left her heartbroken.  Since the break up, Erin has been licking her wounds and has a strict three date rule, that is if the guy makes it past the first date.
Troy Strieber is a rescue paramedic who loves his family, especially his four and three quarters-year-old niece, and his job.   His job exposed him to one of the worst days of his life.  Since that day, Troy has become a changed man.  He's now a play by the rules, safe guy, who doesn't take risks.
Erin and Troy are thrown together by their friends with the goal that Troy will find THE guy for Erin while playing her matchmaker/wingman.  What the two don't expect is to consistently find themselves on dates together. While these two have the physical attraction to each other down pat, the question becomes can a girl who likes to climb mountains be happy with a guy who likes to keep his feet on the ground.
These two will have to figure out that there's a time to play by the rules and there's a time to break them. They will have to risk their hearts for the greatest reward of their lives.  I really enjoyed this fun read from Robin.  Oh, word of caution, be prepared to laugh and laugh.
Rating: 5
Release Date: April 14, 2014
Book Length: 268 pages
Source: Publisher
Reviewed by: Kim
Reading Format: Available only in eBook

Kissing the Maid of Honor Review
Her Accidental Boyfriend Review