5 Star Review ~ HOT ON THE HUNT by Melissa Cutler 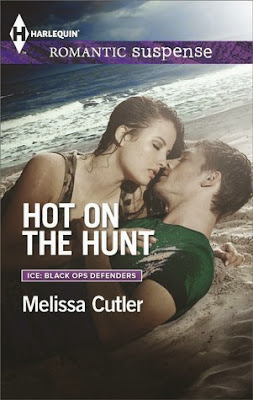 This ex-ICE agent has one last chance with the one who got away — if he can protect her long enough...


Black-ops agent Alicia Troy spent years plotting the perfect revenge on the man who left her for dead…until her plan is foiled by her ex-teammate—and ex-lover—who taught her the meaning of betrayal. She can't trust John Witter…so why can't she stop wanting him?

For John, it's a race to get to Alicia's intended victim before she does because he's the only one who can prove John's innocence, but the race turns into a battle of wits against the woman who believes he deceived her. But when their former agency turns on them both, labeling them "armed and dangerous," John has a new mission: keep his woman alive.

I’m a huge fan of Melissa Cutler’s ICE: Black Ops Defenders Series.  From the first page of Tempted into Danger, I was hooked.  That’s also the first book where you get to know Alicia Troy and John Witter.  After I read Tempted into Danger, I remember begging Melissa for more information on John.  Of course, I got NOTHING!  To say I was looking forward to reading Hot on the Hunt was an understatement.  In fact, I myself didn’t realize how much I wanted this book until I picked it up and started reading it.

Hot on the Hunt picks up twenty months after the events of Tempted into Danger.  I strongly recommend that you read Tempted into Danger before you read this book because it contains spoilers and you may not understand some of the character interactions if you don’t.

Alicia Troy and John Witter are both former Black Op Operatives for ICE.  In fact, they were on the same team until one fateful day when their lives as they knew them changed forever.  Alicia should have died that day.  But instead, her fight and spirit kept her alive and her perseverance has pushed her to recover. It doesn’t hurt that she’s driven by revenge for losing everything that has meant so much to her.  After that fateful day, John has been trying to prove his innocence, even though he is a man without friends or a country.

Melissa writes words that leap off of the page and put you into the action of the book.  I fell for John in the first book, and I continued to fall for him in this one.  John is a sniper who’s very good at what he does, but is a man who is empty and broken inside.  Alicia is computer savvy and lethal, but she’s filled with anger, doubt, and revenge.  When these two get together, the spark and connection they once had shows.

Agreeing to work together to engage the same target, Alicia and John come to terms with their past.  But their journey to a happy ending isn’t going to be smooth sailing when a hurricane hits the tropical island they’re on.  Bullets start to fly and the hunters become the hunted.  Prepare yourself for laughable moments that will have you completely smiling and for an oh my god moment.

There are so many things about this book to love, but saying anything about how I feel could possibly spoil the book, because I would want to go into details.  I will say Hot on the Hunt is worth reading and days later just thinking about it brings a smile to my face.  My only negative thought on the book was that it didn’t have an Epilogue, but I guess that’s what my imagination is for.

Purchase Hot on the Hunt from Amazon or your favorite retailer