Interview & Giveaway with Shannyn Schroeder, author of Catch Your Breath 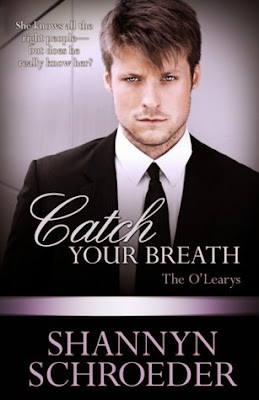 As kids they steered clear of one another–but now a beautiful, well-connected reporter and a sexy, driven detective are all grown-up and on the job. . .


Moira O’Leary’s work as a reporter gives her access to some of Chicago’s swankiest soirées. She knows how to navigate the jet-set crowd, and her style and confidence help her blend right in. But when her childhood crush starts popping up at posh events, her poise begins to falter–until she realizes she has the upper hand in a high-stakes game of secrets and seduction...

Jimmy O’Malley has always tried to avoid his friend Liam’s little sister. Something about Moira spelled trouble. But he’s out of his element working undercover in Chicago’s high society, and Moira is his ticket to the inner circle. As sparks begin to fly–and their chemistry heats up–Moira gets dangerously close to his investigation. Will Jimmy be forced to push her away to keep her safe–or will they surrender to a desire that could leave them breathless?

In this scene, it’s the annual block party and Moira is doing a water balloon toss before getting distracted.
Colin whistled to announce the start of the toss. After the first lob, the lines took a step back.

“She was here at Christmas. Didn’t you see her?”

Moira shrugged as the balloon came back to her. Another step back, widening the gap between players. Balloons were dropped and handled too harshly. Women squealed as cold water splashed against them. It only took another ten minutes until they were down to the final three couples.

Olivia released the balloon into a high arc as someone yelled, “Hey, Moira.”

Moira looked next to Olivia and saw a second balloon in the air. This one coming like a line drive at her. What the hell?

She tried to keep her eye on her balloon, but the other reached her first and smacked her on the chest, exploding with cold water. In the meantime, her balloon landed at her feet, soaking into her gym shoes.

The cackling laugh sounding behind Olivia told her exactly who had thrown the balloon. Kevin. She was going to kill him. He ran down the block, laughing, so she took off after him. They neared his house and he whipped by Jimmy.

Jimmy stood and stopped her progression. “Don’t you think a wet T-shirt contest is a little inappropriate?”

She looked down at her chest and realized how exposed she was. Leave it to Jimmy to embarrass her. She clamped down on her jaw and held tight to her anger. “You think this was my idea? It was a water balloon toss that I haven’t lost for over ten years. If your stupid ass brother didn’t attack me with a water balloon, I would’ve won.”

She plucked the material from her skin and allowed a calming breath to ease past her lips.

Then Kevin made the mistake of yelling from his porch, “Looking good, Moira.”

Her rage returned tenfold and she leaped for him, but got nowhere. Jimmy had swooped in and scooped her up by her waist. She scrambled like a cartoon character with her feet off the ground.

He whispered in her ear. “Why don’t you go change? I’ll deal with Kevin.”

She smacked his chest and he set her down, but didn’t allow enough room for her escape. “Change into what? Unlike you, I don’t live at home. I don’t have clothes here.”

“Borrow something of Maggie’s.”

She laughed. “Have you ever taken a look at my baby sister? There’s no way her shirt would fit me.”

He sighed and his eyes darted everywhere but at her. Then he reached over his head and tugged his shirt off. Moira lost the ability to think. Whoever said Chicago cops carried a spare tire around the middle and ate nothing but doughnuts had never laid eyes on Jimmy. Lots of delectable muscle.

The shirt landed on her shoulder.

“Here. Lucky for you, I do live here and can get a new shirt.”

Her brain came back online and she said, “Thanks.” He always took her off guard when he did something nice. She couldn’t quite read him and it annoyed the hell out of her.

“Whatever. I’m sure your brothers don’t want everyone staring at you. I’m saving you some embarrassment.”

And he was back. The Jimmy she was used to, treating her like the bothersome kid sister who needed to be protected.

Hi Shannyn.  How are you?  It's been awhile since we've talked.  I had to stalk your website to refresh my memory.  Sorry.  But, you've been busy.

Hi Kim – It’s great to be back here. Thanks for having me. I have been really busy. The O’Learys have taken over much of my life and I’ve been branching off into other things as well.

Moira FINALLY gets her own story in Catch Your Breath.  What is it about her that you love so much?

There is so much to love about Moira. She’s my favorite heroine so far. She’s bubbly and fun and snarky. She stands up for herself and goes after what she wants. There’s not much I don’t like about her. She was a blast to write.

How badly are you and the other characters (her siblings) going to make her squirm?  I mean she's known for getting into her brothers' love lives, turnaround is fair play.

Her brother Liam is the only real problem, and she doesn’t even see him as one — until he finds out about her and Jimmy and asks older brother Ryan to intervene. We get a glimpse of Liam, who is normally a really quiet guy, get furious at the thought of Jimmy with Moira. He doesn’t think Jimmy is the guy for her. Although it plants a seed of doubt in Moira, she’s strong enough to hold her own against any of the O’Leary men.

Jimmy is a friend of Liam's, one of Moira's brothers, and he's working as an undercover cop.  Moira unexpectedly gets close to his investigation.  So, would you say this book has some suspense elements to it?

There are some elements of suspense in the book, but it wouldn’t be categorized as romantic suspense. I think readers know going in that there isn’t going to be any real danger for Jimmy and Moira, although things get a little hairy. The elements of suspense really take a backseat to their relationship.

What makes Jimmy perfect for Moira?

This question was really tough. I hadn’t thought about the why of it before. But I think Jimmy’s perfect for Moira because he accepts her and loves her for who she is. She talks too much and she rushes into things, which scares him, but he knows it’s who she is. She really needs someone who can respect her that way.

I mentioned that you've been busy.  What else are you up to?

I just turned in Liam’s book to my editor. Just a Taste will be out next January. I’m currently writing Maggie’s book, which will be the last O’Leary book releasing next summer *sniff *.

In addition, I have a trilogy of novellas coming out this fall that are not related to the O’Learys. The Hot & Nerdy series follows three childhood friends on their last spring break before graduating college. The novellas are New Adult, but still very much in my writing voice, which means if you’re looking for dark and angsty New Adult, this isn’t it.

Thanks for the nice chat.  It's always cool talking to you on Twitter.

It’s always fun talking to you too. Thanks again for having me.

Check out my review of Catch Your Breath here!!!

Shannyn is a former English teacher, who now works as a part-time editor while raising her three kids.

That first book is safely buried on her hard drive, but the process set Shannyn on the path to where she is today—agented with a debut ebook coming out with Kensington in late 2012.