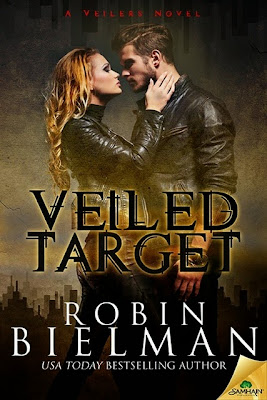 Never take Fate along on a date. The kiss goodnight could be deadly.


Tracking down Veilers—non humans—is only a sideline for Tess Damon. Vengeance for her fiancé’s murder is her reason for living. But with two botched jobs on her record, if she fails to eliminate her next mark, she’s dead. She’s not afraid to die, but not before she gets even. Too bad fate has a really bad sense of humor.

Hugh Langston, a wolfen half shifter, lives to keep both humans and his pack safe. But when rogue humans kidnap his apprentice, his rescue mission is compromised by a hot-as-hell, kick-ass woman who makes him think only one thing: mine.

Tess tries to ignore her feelings, but temptation trips her up. Especially when Hugh figures out he’s her next target and forces her into an inconvenient alliance that tests all the laws against their attraction. Now, with the line between good and evil getting blurrier by the minute, it becomes clear Tess’s only hope of living to see another day—and finding a murderer—lies with the one man she’s supposed to kill.

Warning: Contains one obscenely hot alpha and the woman who wants to love him before she kills him. Look out for a blind date, scorching sex, humor, lies, and untamable attraction.

Robin Bielman’s first step into the paranormal romance writing world is a total success.  Veiled Target brings you an Alpha wolfen half shifter and a kick-ass assassin, who can’t seem to not stop thinking about each other.

Hugh Langston is the pack leader of the Night Runners.  He doesn’t do love or believe in love since his older brother died of a broken heart.  Hugh’s life consists of making sure his pack is safe and using his aviation business to help rescue missing humans who get trapped or loss in wilderness environments.

Tess Damon has lived a really hard life but she’s a survivor.  Tess is a private investigator who specializes in eliminations.  For Tess, her world came to an end five years ago when a wolfen killed her fiancé.  Now, the only meaning her life has is tracking down and killing the wolfen who destroyed her world.

Tess’s last two assignments ended in failure.  Her new assignment is to take out Hugh Langston and failure could mean the end of her life. First, she has to get a forced upon blind date out of the way.  Hugh’s number two is missing and all he can do is show up for the blind date Trey is supposed to have, and hope it will lead to clues as to where he is.  With Hugh pretending to be Trey, he meets up with Tess and sparks fly.

The two eventually figure out who they truly are and agree to work together to find Trey and the wolfen Tess has been searching for.  Once those two are found, they agree to revisit Hugh’s extinction.  But things aren't so simple. Loyalties and beliefs shouldn’t be questioned, but they are.  And Hugh and Tess shouldn’t be falling in love with each other and revealing their biggest secrets and fears, but they are.

Veiled Target is a hot read about discovery, acceptance, and finding love. Mixed with suspense elements, it's a page turner that you aren’t going to want to put down.

Purchase Veiled Target from Amazon or your favorite eRetailer