Review ~ ACT LIKE YOU LOVE ME by Cindi Madsen 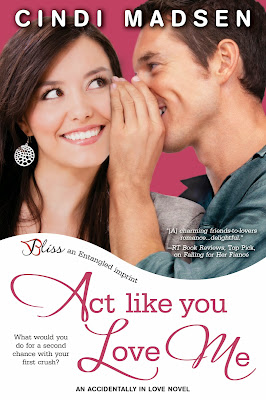 What would you do for a second chance with your first crush?

Brynn McAdams isn’t the awkward drama geek she was in high school—she’s grown up and confident, or at least she likes to think so. But when her old crush, the impossibly handsome and impossibly unattainable Sawyer Raines, comes back to town to direct her community play, Brynn finds herself determined to be someone other than the girl he doesn’t even recognize. Good thing she’s an excellent actress.


After his bad breakup in NYC, the last thing Sawyer wants is to get involved with another actress. But the glamorous and beautiful Brynn draws him in, even though as her director, he knows she’s off-limits. There’s just something about the woman that feels…familiar. Like home.

As Brynn’s lies start to snowball, she struggles to stop acting and come clean. But what if Sawyer is already falling for the fake Brynn, not the Brynn she truly is?

Act Like You Love Me is the story of an outcast drama geek finally getting her guy.  Let’s face it, high school SUCKED!  No one knows that better than Brynn McAdams and Sawyer Raines, but for very different reasons.

Brynn is a “head in the clouds” kind of girl.  In high school, she marched to the beat of her own drummer.  She had a serious, serious crush on Sawyer, but he never noticed her.  In fact, she actually got up the nerve to ask him to prom. Sawyer’s response was to shake his head and walk away.  Sawyer might have been a jock, had the looks, the girl, and the popularity, but things in his life were far from perfect.

These two are given a second chance to discover and re-discover each other when Sawyer returns to his hometown to direct a local play.  When Brynn discovers that Sawyer is the director and doesn’t remember her, she pretends to be someone else.  The more time they spend together, the more they fall for each other.  Just when things are looking really good for these two, Brynn’s deception comes to light.  They are going to have to do some soul searching  to put the past in the past and leave it there.  They are also going to have to figure out what’s more important, pride and safety or taking a leap of faith and having everything you’ve dreamed of.

I LOVED the first book in the series,  Falling for Her Fiancé.  I mean seriously, no one can compete with Wes and Dani.  I wasn't sure how I was going to feel about Act Like You Love Me.  I will admit, it took me some time to get into it. Not Wes.  But I found myself liking Brynn and Sawyer a lot and understanding where they each were coming from.  There were definitely times I wanted to jump into the book and pull them each aside and ask what the heck they were doing.  But I found my heart breaking right along with them.  I mean seriously, my chest was aching.  Cindi Madsen continues to write characters you can’t help but fall in love with.

Falling for Her Fiancé Review
An Officer and a Rebel Review