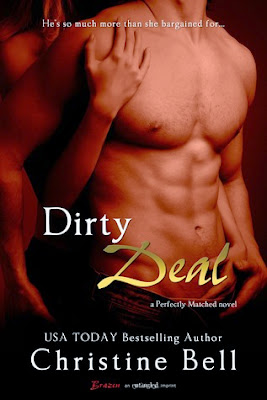 Professional matchmaker Serena Elliott spends her workdays helping clients find love. It’s the perfect gig. She gets to see the good part of the relationships...before things inevitably turn to crap. She leads her own love life the same way. Get in, and get out before things get too complicated. One date with sexy army doctor, Bryan Metcalf, won’t be enough to make her change her mind, no matter how hot it gets…


Bryan has had his share of crazy women and isn’t in the market for another relationship that ends by way of restraining order. When Serena Elliott gets into a bidding war for him at a charity bachelor auction, he’s a little worried. Turns out she’s just as anti-relationship as he is, and could be the solution to all his problems. If he can convince her to be his fake girlfriend, he just might be able to spend the rest of his leave in peace. Now if only he can stop thinking about that night on the beach…

But there are other forces at work that believe these two belong together, and they just might find out that happily ever afters do exist.

It’s been awhile since I’ve read a book from Christine Bell.  Picking up Dirty Deal reminded me why I love her.  The first page had me laughing and set the pace for a nice, steamy comfort read.

Serena Elliott is part owner of Love Will Find a Way, a matchmaking service. Her partner, Grace Love, is convinced that Bryan Metcalf will make the perfect spokesperson for the company.  But Grace has over extended her approaching limit.  Bryan now runs from her and her phone calls.  Grace convinces Serena that winning an evening with Bryan is her last chance to do her pitch.

Bryan Metcalf gets tricked by his sister, Quinn to fill in at the last minute to be a bachelor up for auction at a charity event she planned.  Not only does the Adam and Eve theme leave little for his costume, he discovers that his crazy ex is in the audience and bidding on him.

Serena ultimately wins the evening with Bryan and makes a deal that he will be their spokesperson, in exchange for her being his fake girlfriend, to keep the crazy ex away.  There is no denying that these two are attracted to each other. They both had less than desirable childhoods that have resulted in them not believing in relationships.  They just never thought that a fake relationship turned real friendship could lead to more than they expected or knew they wanted.

Dirty Deal is one of those books you aren’t going to want to put down. Christine continues to write books filled with humor and characters you can’t help but love.  I’m really looking forward to the next book in the series.

Purchase Dirty Deal from Amazon and other eRetailers