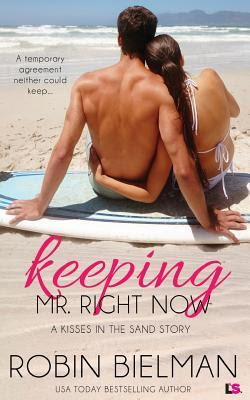 A temporary agreement neither could keep…

Brainy, organized Sophie Birch is no beach bunny.  In fact, she’s totally out of her element among the sun-bronzed crowd at a film festival in beautiful White Strand Cove.  When a surf lesson introduces her to Zane Hollander, suddenly she's up close and personal with the world's sexiest surf star.  But what can a great-looking, experienced athlete possibly see in a klutzy out-of-towner who’s never set foot in the ocean?

Zane Hollander's playboy reputation has never been a problem…until recently.  Now his management team wants him on his best behavior to entice a meaningful new sponsor.  Sophie Birch is the perfect girl to help reform his image.  She's genuine and respected—and their relationship is purely fictional. But the more Sophie blooms under the beachy sun, the more Zane knows he'll just break her heart.  Because nothing's more important to Zane than following the tide.
REVIEW

Talk about being out of your element, Sophie Birch is a Montana girl through and through.  She’s the only child of conservative parents.  She's a smart girl who graduated college at the age of twenty and went on to study research in the field of Neurobiology.  But Sophie wanted to do something different and took a leap of faith to work as an event planner. Now that leap of faith is about to change her life in more ways than she ever could imagine.

Zane Hollander looks like your typical surfer guy.  He just so happens to be at the top of his sport.  Zane has been battling demons his whole life and the ocean is his comfort zone.  Everywhere he goes he has people wanting something from him, whether it’s his autograph, a photo, or a quick vertical/horizontal dance.  Zane is more than happy to assist on all requests.  However, his playboy lifestyle is standing in the way of an important sponsor and organization Zane desperately wants to be a part of.

In the midst of giving Sophie a surf lesson, she almost dies.  Zane’s handlers attempt to use this to their advantage.  They want Sophie to appear to have a relationship with Zane, in order to make him appear to not be a partying playboy. In exchange, his people will provide her with more event planning opportunities, while in White Strand Cove.

Neither expects to become so close to each other in such a short amount of time. But Sophie is different from all the other women Zane meets; she doesn’t want anything from him.  Their friendship turns into more, with Zane sharing things he tends to hide from everyone else.

What I really love about this couple is that before anything bedroom related happened, they were true friends.  When they finally moved their relationship to the bedroom, it’s hot and explosive with fireworks.  Keeping Mr. Right Now gives you a hero and heroine who are more special than either realizes.  It gives you secondary characters that you want to know more about.  But most of all, Keeping Mr. Right Now will make you laugh, cry and leave you with a smile on your face.

The Kisses in the Series:
(Click on the book covers for more information or to purchase from Amazon.)

Blame it on the Kiss ~ Review