Review ~ ONE NIGHT OF SIN by Elle Kennedy 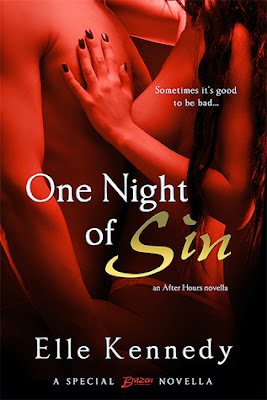 Sometimes it’s good to be bad…


When it comes to sex, good girl Skyler Thompson always plays it safe, choosing stable and sedate over wild and thrilling. She doesn’t do one-night-stands, but one look at sinfully sexy Gage Holt and she’s willing to reconsider. He makes her want to be bad for once in her life, and she’s prepared to take what she wants.

Danger follows former MMA fighter Gage Holt like a shadow. Despite his successes as part owner of Sin, an exclusive nightclub in Boston, Gage can’t risk getting involved with a woman, especially one as sweet as Skyler. Still, he can’t resist a taste—and it’s so damn good he has to see her again.

As addicted as he is to her, Gage knows there’s no future for him and Skyler—not with his past lurking in the dark corners of an MMA cage. But Skylar’s tougher than she looks, and she’s ready to fight for her man.

Before One Night of Sin, I’d never read a book featuring a MMA fighter hero, at least one who was actively fighting.  Now, I know what all the hype is about!!! Oh my GOSH.  Gage Holt is definitely the man to make a good girl do bad things.  One Night of Sin also marks my first time reading Elle Kennedy.  She SERIOUSLY has a new fan in me.

Skyler Thompson and Gage Holt are polar opposites.  She grew up in Beacon Hill, an upscale neighborhood in Boston and he grew up a poor kid from Southie (South Boston).  She’s sunshine and he’s darkness.

Gage is part owner and head of security for Sin, an exclusive nightclub in Boston.  The two meet while Skyler is on a “I’m so not into you” date at Sin. When Skyler and Gage accidentally meet up alone, their lives are forever changed.  What was supposed to be Skyler living one night of being a bad girl with Gage turns into so much more.

One Night of Sin brings you a heroine who is determined, passionate, and stronger than you could ever imagine.  The hero is sexy, protective, broken, and better than he thinks he is.  Filled with hot shower worthy moments and suspense that will have you holding your breath, One Night of Sin is a MUST READ.  I can’t wait for the next book in the series!!!

Purchase One Night of Sin from Amazon or your favorite eRetailer