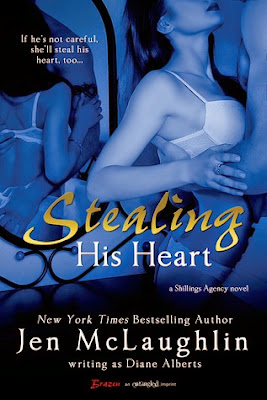 Shillings Agency employee Jake Forsythe is not happy to discover that the thief who he has to track down is none other than his ex-partner from his past.  Now he’s forced to blackmail her into submission…or throw her in jail.


Tara Harris steals from the rich and corrupted, returning objects to their rightful owners one case at a time.  When Jake shows up in her life, at first, she’s thrilled.  But then when she finds out that she has to help the man she stole from or go to jail…it’s the choice between two evils.

These two can’t deny the burning passion between them, but when push comes to shove, they’ll have to lay their hearts and their lives on the line.

Jake Forsythe is former military turned personal security expert for Shillings Agency.  When a safe he was assigned to protect is broken into, he is tasked with finding the person responsible and figuring out where he went wrong. Tara Harris has made it her life's mission to make people pay.  She’s like a modern day Robin Hood, stealing from the rich, powerful, corrupt; righting their wrongs when the law doesn’t see fit.  Tara is also the person who broke into the safe of a mob member to steal a vase he previously stole himself.  The safe of a client of Shillings Agency.

Jake and Tara have a long history.  One that I didn’t find fully told.  I seriously had a hard time getting into this book.  At 29% in, I didn't have a problem with Jake.  I didn't love him nor hate him, he was just there.  And I was totally NOT feeling Tara.  Once Jake catches her, she’s told that she has to help figure out where he went wrong with his code or she’s going to go to jail for her crime. But everything is a joke to her and she doesn’t take anything seriously.

I’m a fan of Diane Alberts and I was really looking forward to reading this book.  So when I would have stopped with other authors, I kept reading, hoping it would be worth wild.  I’m glad I kept reading.  Once I understood Tara’s background, she made sense.  However, Jake’s background was still a little sketchy and I have no idea how they even became friends in the first place.

Due to his time spent in Afghanistan, Jake sustained an injury that cost him his fiancée.  With everything in his life being out of his control, he has to control things in the bedroom.  Tara is a woman who doesn’t take orders from anyone, especially the man who left her unfulfilled years previously.  The push and pull between these two is tiring at times.  Both are strong minded and don’t like to give in.  But when they get together, things are very hot.

Did Stealing His Heart live up to my expectations and the standard set by the previous book, Temporarily Yours?  I don’t think so.  You do however get two characters who will grow on you.  You also get a love story and the ever important, “I screwed up, I’m fixing things” scene.  But there was still a little something missing.  Did the book deter me from wanting to read the next book in the series? Heck no.  I’m really looking forward to seeing what’s in store for Gordon and “the princess”.

Purchase Stealing His Heart from Amazon or your favorite eRetailer