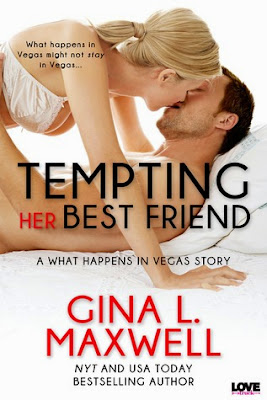 Alyssa Miller is tired of waiting for her next-door neighbor to see her as more than just his best friend. Ready to let off some steam, she heads to Las Vegas for a romance book convention where, if she's lucky, she’ll get down and dirty with one of the sexy cover models.

Dillon Alexander doesn’t do commitment—especially not where his best friend is concerned. She deserves a man who can give her the world, not damaged goods. But when he realizes Alyssa intends to have a one-night stand on her vacation, he hauls ass after her to make sure he’s the one to scratch her itch.

Neither of them expects their explosive chemistry to burn hotter than the lights on the strip, but with a little help from Elvis, Marilyn Monroe, a flamboyant matchmaker, and TSA, what happens in Vegas might not stay in Vegas…

REVIEW
I will admit, I’m late to the Gina L. Maxwell bandwagon.  I had no ideal what to expect.  Well, I should have known that the book was going to pack some heat. I didn’t expect to laugh so much.

Alyssa Miller and Dillon Alexander have been friends since they were kids, almost twenty years.  During most of that time, they have liked each other as more than friends, they just haven’t said anything.  They’re next door neighbors who have been in a sexless relationship for years.  They’re always hanging out together and she’s always cooking dinner for him.  Total couple.

Dillon fears that he is just like his father, unable to commit to anyone permanently.  Thus, Alyssa is left on the sideline watching women parade in and out of Dillon’s door.  Now, she’s tired and is finally ready to go after what she wants.  Romance lover Alyssa is planning on attending a romance book convention in Las Vegas.  She wants Dillon to join her and hopes “Sin City” lives up to its name.  Too bad things don’t go according to plan.

With a little push from his sister, Dillon eventually flies to Vegas to claim his woman.  What transpires is entertainingly funny, hot, and totally illegal. Needless to say my first Gina L. Maxwell book was a success.  I will say initially, I thought that the epilogue wasn’t needed, but it totally set up the next book in the series.  I can’t wait to see how it plays out.

Purchase Tempting Her Best Friend from Amazon or your favorite eRetailer